It’s getting so close and I’m actually getting anxious to get to see this movie! It also means that the news they are giving us about this upcoming movie are being given with heaps! The first news fact is that Warner Bros and Doritos have released a new sort of trailer for Dawn of Justice. Check it out below!

Stars Henry Cavill and Ben Affleck tell us the story of how the conflict between the two iconic superheroes start. I’m very curious how Lex Luthor will be portrayed. He’s really sarcastic in the trailers and I truly love it!

News fact number two: While its getting closer for this movie, fans want to know more and more details. Titan Magazine has the exact thing that fans would want at home! 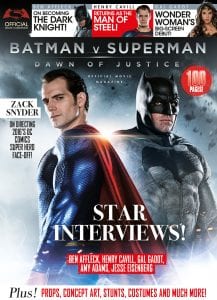 They made an edition which includes 100 pages full of movie content like interviews with Ben Affleck, Henry Cavill, Gal Gadot and even one from Zach Snyder. It also has behind the scenes designs and concept art to show us. Exactly what the anxious fans need! Go grab one in the stores before you miss out on this precious magazine.

Fact number three: Deadline has said with their sources inside an out of Warner Bros., that they are doing amazingly well for pre-sale tickets. It has already passed a good $20 million, which is more than blockbusters like Deadpool and Marvel’s The Avengers. Fun fact, 80% of the tickets that have been sold are to males. That makes a 20% of us females that are getting out there, which is pretty amazing!

With all the news facts out of the way, Batman V. Superman: Dawn of Justice will hit the theatres on March 25. Pre-order your ticket already if you want to make sure you don’t miss out!