The costumes were billed as the only remaining outfits actually worn by actors Adam West and Burt Ward on the popular show and are among 200 memorabilia items from the pop culture treasure trove of American collector John Azarian that are being auctioned off this week.

“I wouldn’t want to break up the pair,” he said. “They are the only complete and original pair in the world. There are other costumes but they are missing pieces or there are replica pieces. Mine are 100 percent authentic.”

The Profiles in History auction, scheduled for Dec. 17, will feature other items Azarian has collected over the past 30 years.  The Shakespeare bust that hid the switch to open the Batcave on the TV show sold for $150,000.00.

“I’m a child of the sixties,” Azarian said. “These are the shows that I grew up with, that I loved as a kid. I didn’t collect for investment purposes.”

“I just feel it’s time for me to move on and let somebody else enjoy them as much as I have for the last 30 years,” he said.

Holy big bucks, Batman! Would you pay that much for a pair of costumes? Let us know your thoughts in the comments below!

Here’s the official description of the auctioned costumes:

“The Dynamic Duo – “Batman” complete Batsuit and “Robin” complete Boy Wonder uniform from Batman. (TCF TV, 1966-68) From stately Wayne Manor to the streets of Gotham City, this iconic complete costume stands as the definitive television iteration of the world’s most popular superhero, Batman. Consisting of a midnight blue satin Bat cowl with painted ear, brow, and eyebrow detailing over a production accurate helmet armature, midnight blue satin cape cut in the classic “bat” style with scalloped lower hem and internal bias label reading, “A1”, gray athletic stretch fabric leotard with applied hand-painted Bat insignia at center chest, gray athletic stretch fabric Bat tights, midnight blue satin gauntlet gloves with leather palms (winglets removed post production), midnight blue satin Bat trunks, custom blue leather Bat boots with side zipper closure, and caution yellow leather and canvas utility belt with snap pouches and metal buckle etched with the Bat insignia. The Caped Crusader is accompanied by the still-definitive screen version of Robin, the ever-exuberant sidekick who helps thwart Gotham’s most nefarious ne’er-do-wells and still finds time to finish his algebra homework. The complete costume includes a black satin mask with hook and eye closure, signed on the felt backing by Burt Ward, a canary yellow satin cape, a red gabardine tunic with yellow laces down the center front, black and yellow felt “R” affixed to left chest, and red satin lining, a faded pale green t-shirt marked internally “VP”, flesh colored superhero tights marked internally “VP”, forest green knit trunks with internal bias label marked, “VP”, custom forest green suede boots used for stunts with Mercury-style wings swooping back at ankles, and finished with a black leather belt with brass buckled and six attached gold-painted wooden cartridges, marked internally, “B”. Exhibiting some fading, color softening, crazing to paint, seam wear, tiny holes, and general age. Fans and scholars have long surmised that rather than hero and stunt Batsuits and Boy Wonder uniforms, all Batman and Robin costumes were made to the principal actors’ specifications. Instead of creating different versions, suits were demoted due to wear or assigned as needed to use by the various stunt performers who featured in each episode of the show. Therefore, every Batman and Robin uniform on the production started life as a costume for the principal actors. This offering represents a likely once-in-a-lifetime chance to own a complete set of signature costumes from the most influential superheroes to ever swing across the small screen. The campy mod series brought the comics to life with a sophisticated, pop art sensibility, both exaggerating and celebrating the tropes of the medium. Different from the kid-targeted series before it, Batman’s comedic approach confronted the boundaries of the genre, which forced comics themselves to evolve in new directions. It’s this combination of both genuine affection and ironic detachment that have allowed today’s comic franchises to become the most successful and universally enjoyed entertainments in human history. These larger-than-life, yet all too human heroes have formed the basis for the dominant mythos of our age. And it began here, with a Caped Crusader, a Boy Wonder, and a Zok! Bang! Pow! In our original catalog description, we stated this pair to be the “only known pair of complete costumes in the world.” Since publishing the catalog, another complete pair of Batman and Robin costumes has been brought to our attention that are presently exhibited at the Hollywood Museum, Hollywood, California. Provenance: Profiles in History, HACR 1, Oct. 8, 1995, Lot 5. Exhibited: Louisville Slugger Museum, Louisville, KY.” 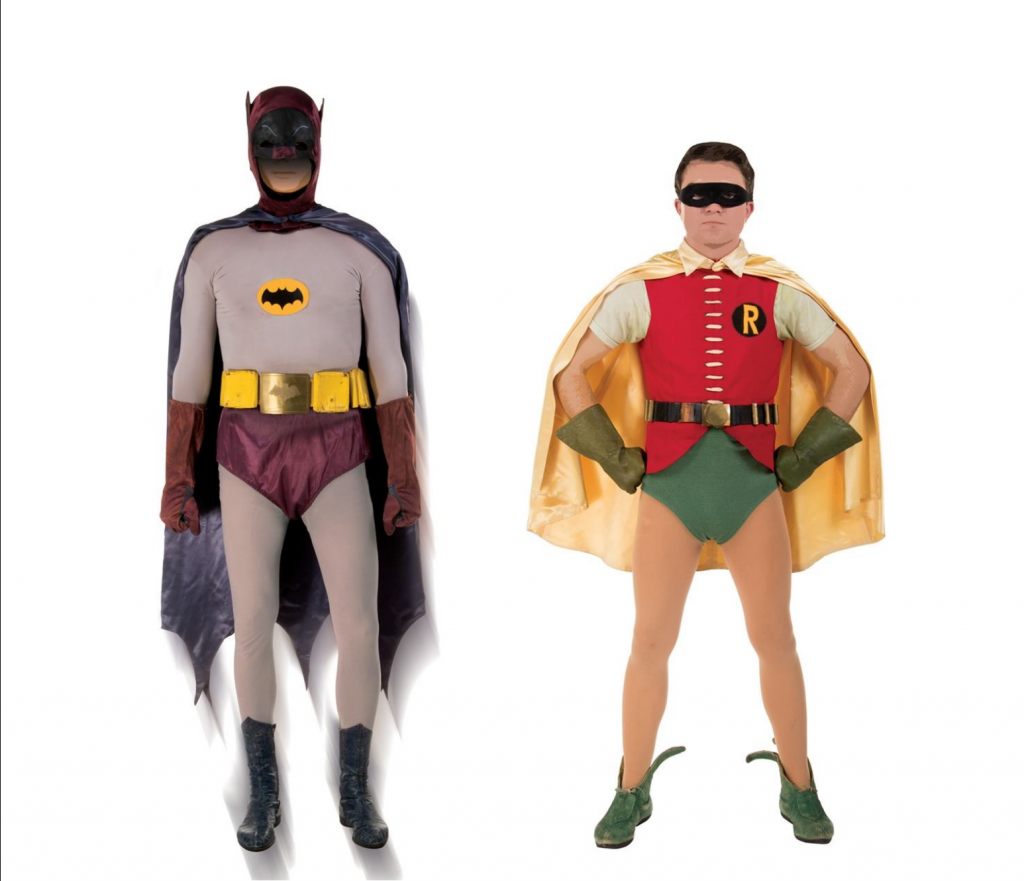