Back in May Geoff Johns turned the DC Universe upside down (no that’s not a Stranger Things reference) in what was believed to be his final comic book (spoiler alert, it’s not). The publication of Rebirth #1 not only helped dissolve the New 52 but also tried to explain it’s existence. From the start the New 52 was met with mixed reviews. Continuity was wiped, characters and their relationships drastically changed, and the overall feel of the DC Universe was a bit… off. With Rebirth #1 Johns tried to explain the event away instead of pretending that the New 52 didn’t exist, and what he came up with was a mind melter.

I personally loved Rebirth #1. As a matter of fact it was my favorite individual comic of 2016 (for those of you who want to know my full thoughts turn to my blog I Am Geek), and a great deal of that love had to do with Johns ability to connect the DC Universe to Alan Moore’s Watchmen universe. Whaaaaaaaaat?!?! Yeah you read that right, the reason that the New 52 happened is because Dr. Manhattan has been manipulating time for his own personal enjoyment. I guess things get kind of boring on Mars. It was a twist that I personally didn’t see coming and had me wanting to talk to everyone and everybody about this book and the new direction of the DC Universe. Seriously, I geeked out hard for this.

Since May though, DC has been slow burning it’s Watchmen connection. The Comedian’s button, which was discovered in the Bat Cave, has been the hard evidence that shows the connections, but outside of that there really hasn’t been much else. Books like Titans, The Flash, and to a degree Batman have been alluding to this connection without fully exploring it, keeping things at arms length. Well, the slow burn is about to be picking up some speed when Batman and The Flash start a four issue crossover entitled, “The Button” this April. 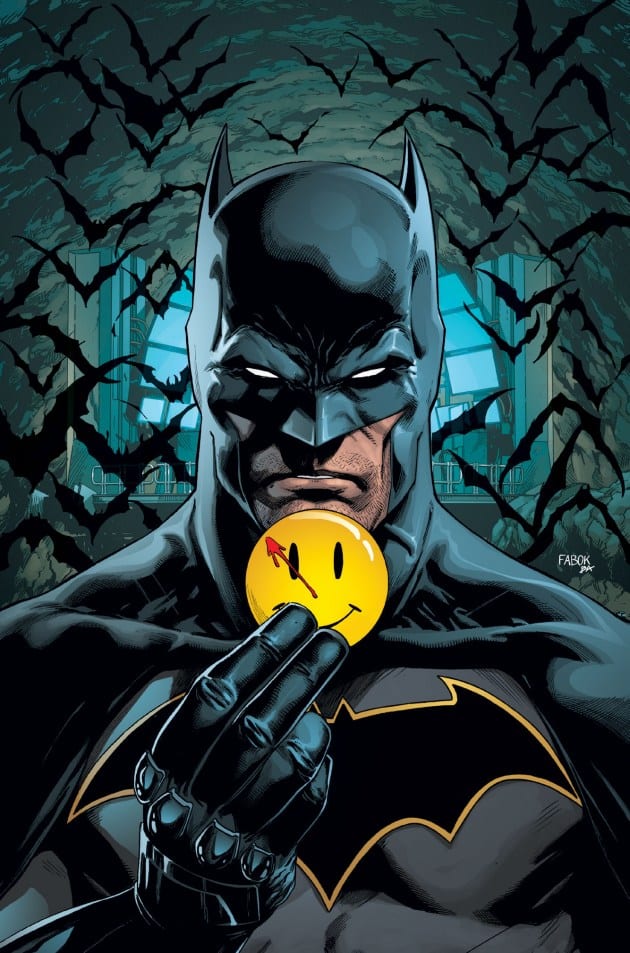 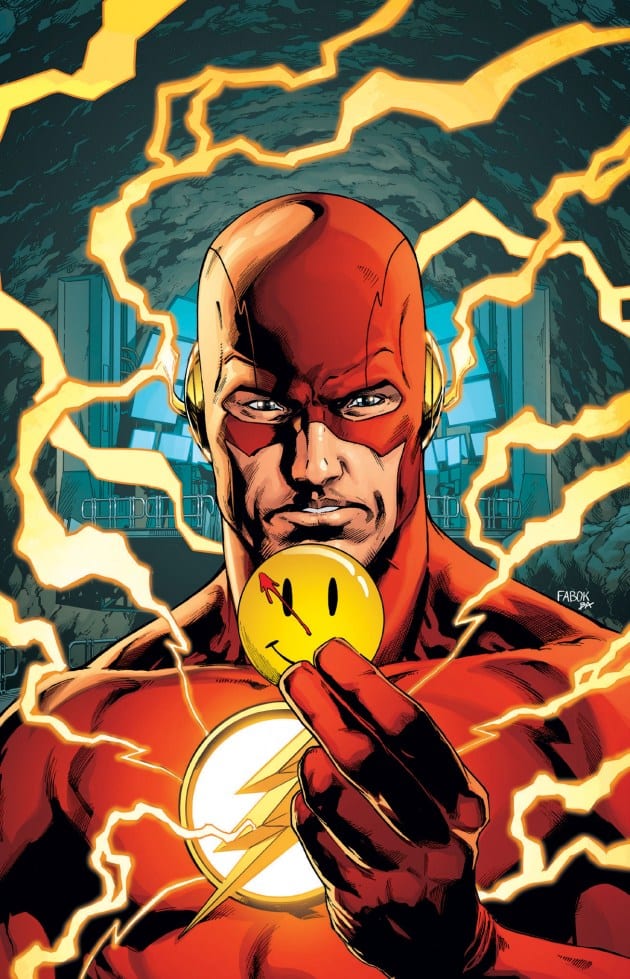 Here’s the DC synopsis on the crossover event.

If you’ve been wondering about how the mystery behind Geoff Johns’ DC UNIVERSE: REBIRTH #1 continues, you’ll find out more beginning this April in “The Button,” a four part story arc in issues #21 and #22 of BATMAN and THE FLASH.

Courtesy of the Batman team of writer Tom King and artist Jason Fabok, along with The Flash writer Joshua Williamson and artist Howard Porter, the two greatest detectives in the DC Universe unite to unravel the mystery behind a certain blood stained smiley face button stuck in the Batcave wall. However, what begins as a simple investigation soon turns deadly when the secrets of the button prove irresistible to an unwelcome third party – and it’s not who anyone suspects! This is a mystery woven throughout time, and the countdown starts here!

In addition to the standard $2.99 covers on Batman and The Flash in late April and early May, each of the four issues will feature a special $3.99 lenticular cover, all drawn by Jason Fabok. Don’t miss the chance to find out more about the mysteries behind DC REBIRTH when these issues hit your local comics retailer beginning April 19!

Both Batman and The Flash are considered to be DC’s two best detectives which makes them perfectly equipped to solve this mystery. You have to remember, while we know that that button belongs to the Comedian (!!!) Batman and the Flash just think it’s a smiley face with some blood on it. They don’t understand the pop culture importance here. I will tell you though that The Flash and Batman are two of my favorite Rebirth books (Tom King and Jason Fabok or killing it… and Tom King writing about the Watchmen is enough to give me geeky giggles) and seeing them start the ball rolling on this event is super exciting.

Just think about Batman’s reaction to the Comedian. Someone put in a position of power and hope and how terribly he abused it. Granted there’s more depth to the Comedian then that, but is there a part of Batman who could see the Comedian and wonder if that could have been him? I don’t know but this event opens the door to so many different possibilities and raises so many different questions. I mean, is Dr. Manhattan really a villain here or could there be a bigger explanation to why he manipulated time? While we don’t know whose watching the Watchmen we do know who the Watchmen are watching.

What do you think Geeklings? Are you excited to finally see this connection explored? Are Batman and the Flash the right DC duo to start this event? What connections are you hoping to find? Sound off in the comments below or you can find me on Twitter @iamgeek32 if you want to talk more. April can’t come soon enough.