Jameela Jamil, who plays the role of Tahani Al-Jamil in The Good Place, will make her MCU debut in She-Hulk: Attorney at Law on July 24th, and she seems to have had a wonderful time at Comic-Con promoting the program.

In keeping with the long history of celebrities strolling down the aisle unnoticed, Jamil and a buddy dressed up as Mario and Luigi, and no one recognized who the lanky green plumber was:

While she was on her way to the airport, she got to sample the scent of Ant-Man himself, Paul Rudd. He smells like “eternal youth and pure delight,” according to Jamil: Jamil has become an expert in assessing the odors of celebrities, with Keanu Reeves’ scent being reminiscent “of respect and goodwill” at the premiere of DC League of Super-Pets.

Titania, in “She-Hulk: Attorney at Law,” We’re glad to see Jamil play Titania. In Marvel comics, Titania (also known as Mary MacPherran) was a normal woman who was given metagene abilities by Doctor Doom, giving her limitless strength and endurance as well as immunity to physical assaults. 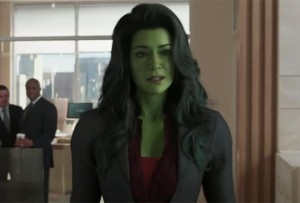 That’s why, over the years, Titania has drifted away from supervillainy and toward becoming a more antihero as she developed her talentset.

Whether we’ll see Titania in the MCU after She-Hulk is uncertain, so keep your fingers crossed that her first wall-smashing appearance is a success.