This Season of Arrow has not only kept the momentum up from last season, but also somehow found a way to raise the stakes for each character. It’s not just Oliver being threatened this time but his entire team in their own particular ways as Cayden James has amassed his own Team Anti-Arrow. Though despite all the complexities and interesting face-offs, there is one story thread this season that doesn’t make sense – or rather, doesn’t make sense any more: The Criminal Investigation of Green Arrow.

In past seasons, this made sense when it was ‘The Hood’/ ‘The Arrow’. For starters, there was a lot more killing then; but now the Green Arrow – or at least his public presence – is one of a hero. He’s worked with the SCPD, he led the city against Damien Darhk and most importantly he was given praise by the President of the United States! The Green Arrow is the exact opposite of a ‘threat to national security’ and has been shown to be a force of good. Even when framed/ tricked into something, he is ultimately exonerated. For example, last season Oliver did have to publicly condemn the Green Arrow, but in the months following (where Adrian Chase was revealed to be Prometheus) he’s sure to have been exonerated of those transgressions – or at least had them explained. So why now? And why so fiercely? 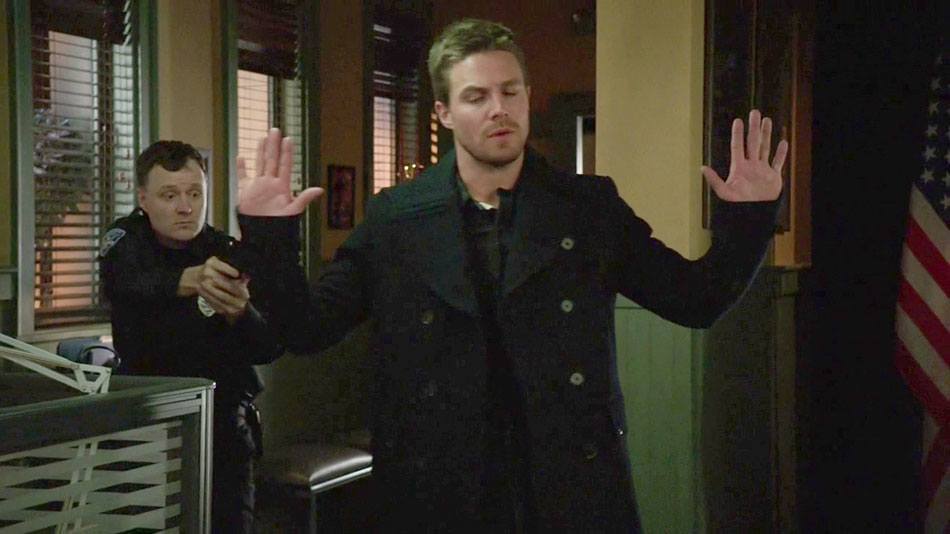 The easy answer to all this is that FBI Agent Samandra Watson has her own motivations and/or might be working with Cayden James; but the MidSeason Finale would have been the perfect time to reveal that. This means there’s still a chance Agent Watson is “just doing her job”, but is she? The way she has handled this case and how she arrested Oliver publicly for being the Green Arrow was incredibly unprofessional. She knows full well that such allegations could bring repercussions to his son and family members. Hell, it’s happened before! Though no matter how much the character of Agent Watson is being written to be hated, there’s still the chance that she is good in some way. Perhaps this is all just some sort of ‘realistic’ read of the situation. Though there’s actually several items that make this incredibly unrealistic: (1) again, the President of the United States acknowledged the Green Arrow as a hero just last season, (2) the world saw him fight off Nazi invaders this season and (3) other heroes like the Flash seem to get a pass!

Though to be completely fair, super powered heroes getting a pass and non-powered heroes being labeled as vigilantes/ criminals is nothing new. Hell, this debate has been going on for ages with Superman and Batman – just swap in Flash and Green Arrow. Green Arrow and Flash have both worked with their respective Police Departments, but it’s only when Green Arrow helps catch the bad guy that we hear ‘he makes the police seem ill-prepared’. And the Flash doesn’t? When dealing with metas, the CCPD need the help of a meta. When dealing with highly trained/ weaponized villains, shouldn’t the SCPD have a little bit of help as well? Furthermore, remember that Green Arrow always turns over the villains. The Flash on the other hand has often locked metas away in the pipeline prison. Does Green Arrow get the short end of the stick because he’s still just human?

But what do you think? After appearing in almost every season, is this storyline played out? Should they have continued with the ‘leaked photo’ idea and made this more about ‘revealed identities’ instead of ‘Green Arrow = criminal’? Should Team Flash invest in a Metahuman lawyer? Is FBI Agent Watson actually Cayden’s wife and equally blames Oliver for the loss of her son? Sound off in the comments below and get ready to find out what comes of this when Arrow returns Thursday, January 18th!

Home » Fandom » Assessing The Arrowverse: The Problem With The FBI Investigating Green Arrow