2014 was a very crowded year for Ubisoft as they released not one, but two games: Assassins Creed: Unity and Assassins Creed: Rogue. While the first took over the headlines with its game breaking glitches, AC: Rogue mostly flew under the radar due to its last gen status. Some felt it was just a cheap re-skin of AC: Black Flag while others had already moved on to PS4. Though in actuality, AC: Rogue was not only the better of the two games for that year, but also a stunning conclusion to Assassins Creed’s PS3 years. And it’s FINALLY coming to PS4 and XBox One!

The Remaster is being handled by the original studio (Ubisoft Sofia) and will run at 1080p resolution with 4K Support. Additionally, it will include all the original Add-On Content (ie: The Armor of Sir Gunn Quest, The Siege of Fort de Sablewhich, etc) as well as some new customizable packs that allow you to dress Shay like Bayek from AC: Origins. 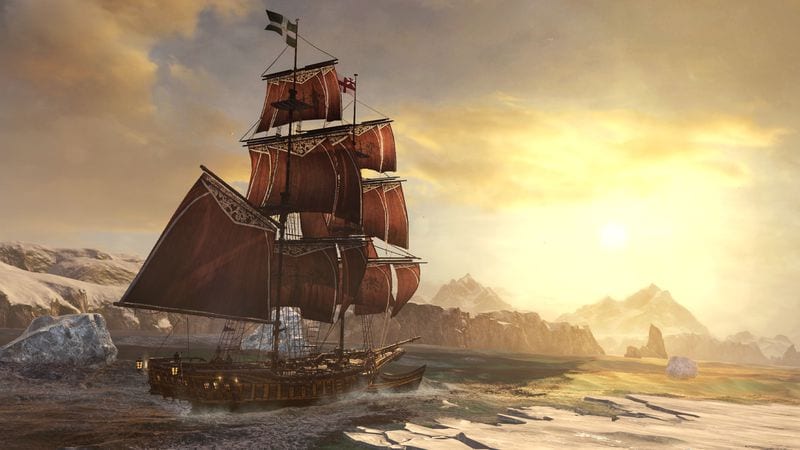 AC: Rogue follows Shay Patrick Cormac as he hunts down the rest of the Assassin  Brotherhood in the Americas. Though as I said in my original review of this game, this isn’t Templar’s Creed. Shay is a full-fledged Assassins and you will see why he leaves the brotherhood. The story is compelling and you feel each twist and turn with Shay. As for the gameplay and world itself, it’s truely a greatest hits of past games. The world design/ feel takes all the best parts of ACIII and AC: Black Flag – aka Tree Running and Naval Exploration. Though the feel is still unique as you explore the North Atlantic and must deal with everything from Icebergs to the narrow channels of the Hudson Valley. Additionally, the economy system of ACII: Brotherhood makes a return as you can renovate various locations and then collect your income all from your Captains Quarters. Plus since you’re now aligned with the Templars, you have quite a few more funds in general at your disposal – aka much fancier and more devastating weapons.

If you enjoyed the PS3 years of Assassins Creed and never got to pick up AC: Rogue, this is absolutely a game to check out. From the Northern Lights to the emotional soundtrack, this game has long deserved a PS4 version. As for why it took this long is beyond me. The game is only 3 years old, so an HD Port makes more sense than calling it a ‘Remaster’ – similar to how Black Flag was released on both PS3 and PS4. Either way though, I’m not complaining and am looking to pick this up when it hits shelves March 20th.