Good Morning, fellow Arrowverse family! It’s been a pretty fantastic week for all of us. Firstly, we got a sneak peek of the remaining 5 episodes of Arrow in a new trailer. Second, Arrow and The Flash  are returning this week after being on hiatus for almost a month.

A few of the actors from the hit CW television series took to Twitter this past week, proclaiming their excitement for the upcoming Season 5 finale, which will be titled ‘Lian Yu’ and will air on May 24th 2017. 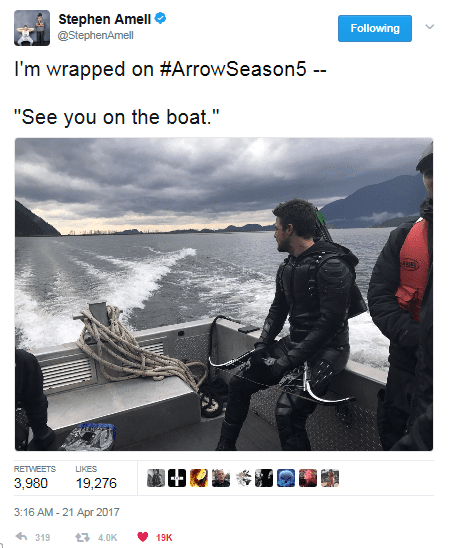 I find it so cool that Stephen got to wrap up his work for Season 5 at the same place where it all began, in the North China Sea.

If you missed the trailer for the exciting final episodes, you can view it below:

Look for our official Arrow Season 5 finale prediction thread, where we will analyze the upcoming anticipated finale!

Arrow will return on Wednesday, April 26th at 8PM/EST on The CW.