After this weeks episode, Kapiushon, we seem to have learned so much more about the history behind Oliver’s ‘killer instinct’. Currently, in the flashbacks, Oliver is still in Russia with his Bratva brothers. For those of us who have been following the show since Season One, we know that one thing is coming. Oliver is going to be going back to Lian Yu.

Although the path in regards to how he gets there is still unclear. Will Anatoly send him there because he feels as though it is Oliver’s ‘purgatory’? Or will Oliver isolate himself there alone on the island. Judging by the Season One premiere episode, Oliver seemed pretty desperate to get off the island when he flagged down those fisherman… so perhaps Oliver was not sent back there willingly (or maybe he just really missed tequila and cheeseburgers).

Earlier this year, executive producer Marc Guggenheim spoke to Entertainment Weekly about the future of season five, and Oliver’s return to Lian Yu.

“I can tease that it will either be by boat or plane,” he said. “I can also tease he won’t be going back alone.” 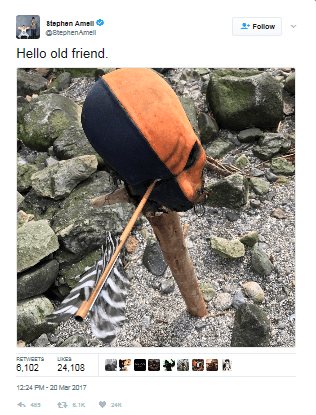 A series novel titled Arrow: Vengeance published a story-line in which we see that Slade put the mask on the beach as a reminder to Oliver that he should never return to the Lian Yu. We’ve seen this mask on this beach before, in the Season Two premiere episode when Diggle and Felicity went to Lian Yu in search for Oliver.

Arrow will return on Wednesday, March 29th at 8PM/EST on The CW.

Home » Uncategorized » ‘Arrow’: Oliver to return to Lian Yu… but will he be alone??