Over the past few weeks we have been receiving mixed signals in regards to whether or not we will be seeing our beloved Deathstroke return to the set of Arrow; more specifically whether or not Manu Bennett will be the one returning as the iconic DC Villain. When social media began blowing up with excitement at the news of whether or not Manu would be journeying back to Vancouver to resume his role, the actor tweeted several statements of denial; including tweets with photos such as the one below: 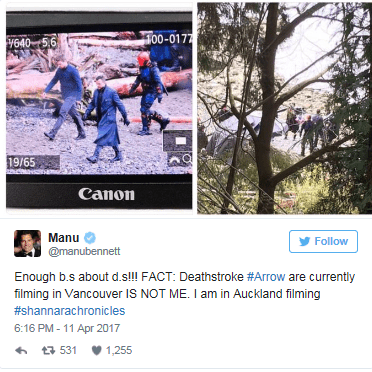 After seeing this tweet, Arrow fans were not shy to hide their disappointment. Why was Manu insisting on the fact that he wasn’t coming back when Stephen Amell, Marc Guggenheim and the Writers Room confirmed that he was? Was this some sort of a late April Fools Day joke?

You’ll be happy to know that this was not the case at all. A recent tweet from Marc Guggeheim may have finally given us the answer to this tiring question:

This theory definitely would explain all the questions that have been circling the heads of many Arrow fans. So while we may not be seeing Manu on the set of Arrow, we will definitely at least be hearing him; which makes Manu’s tweet that the Deathstroke on set is not him make so much more sense. So more than likely, the one in the costume itself may be a stand-in… but hearing Manu’s voice is going to make the nostalgia very real! I’m really interested to see how they are going to be pulling this all together. Hopefully we will keep pushing in this direction and we will have Manu back fully sometime soon!

Arrow will return on Wednesday, April 26th at 8PM/EST on The CW.