Fans of both the hit CW series Arrow and the DC Villain Deathstroke across the Arrowverse were ecstatic with excitement when it was discovered that Manu Bennett would be returning in the Season 5 finale episode.

Bennett first debuted the character of Slade Wilson in Season One of Arrow, as Oliver’s friend when he was first stranded on Lian Yu. Slade then officially debuted as Deathstroke in Season Two, when he was the Season’s ‘big bad’.

When fans began tweeting Manu, praising him for his performance and asking him if he would play Deathstroke in his own mini-series, Manu was quick to respond.

“I think the most important person to get behind any Deathstroke original series is Marv Wolfman, who created the character,”Bennett tweeted.

“Much appreciated, Manu. I love Deathstroke and I was overjoyed to see your return and would love to see you do more.”

Following this tweet from the creator, Arrow fans across the board began tweeting Manu Bennett once more, saying that they should ‘rally’ DC into convincing Deathstroke to get his own spin-off; even if it is just as a mini-series. 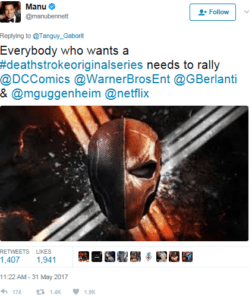 Even if it were to be a Netflix series (or mini series), I think it would be incredibly awesome to see Deathstroke get his own spin-off. There is a lot more to the character than people realize. Also, maybe it is about time that DC starts making their own ‘DC on Netflix’ series’ just like Marvel has done. All of the Marvel series have been a fantastic hit, and perhaps it is something the DC Cinematic Universe needs as well!!

How do you feel about Deathstroke getting his own series?? Tell us in the comments below!!