Slade Wilson aka ‘Deathstroke’ is arguably one of the best villains to come out of the Arrowverse. Not only was the character incredibly well-scripted, but Manu Bennett did a phenomenal job at bringing the villain to life on-screen in The CW show Arrow. Slade is incredibly resourceful, tactically sound, and the arch-enemy of Oliver Queen. 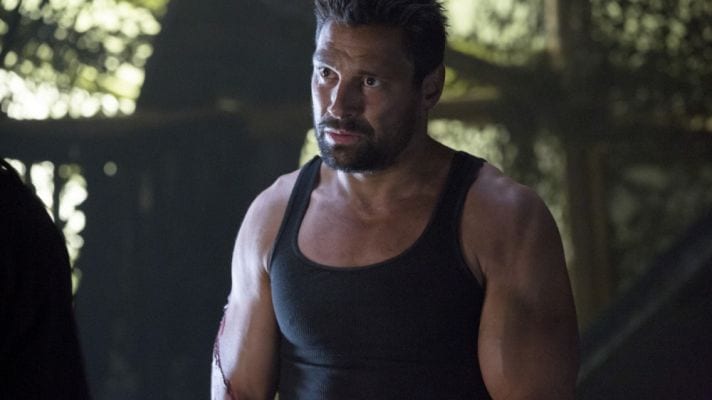 We first met Slade in Season One of Arrow in a flashback sequence of Oliver’s time on Lian Yu. Slade’s originally arrived to Lian Yu with his partner, Billy Wintergreen, as Australian Secret Intelligence Service members (ASIS), whose purpose was to rescue Yao Fei, a former Chinese military commander. However, their plane was shot out of the sky and the two were captured by men working for Edward Fyers. Fyers asked both Slade and Bill to join his cause. Slade refused but Bill accepted Fyer’s offer. Slade was held prisoner in Fyers’ camp until Yao Fei managed to free him. Yao Fei and Slade planned to escape the island by stealing a supply plane that made regular stops on the island, but before they could do so, the two were separated.

Slade eventually discovered a shipwrecked Oliver Queen, who was sent to him after he was rescued from Fyers by Yao Fei. Slade eventually got Oliver trained up with a variety of combative skills. After defeating Fyers, Oliver and Slade developed a close friendship. There were multiple times when Slade referred to Oliver as his ‘brother’. However, there were times when their friendship had its ‘moments’, as they both desired the love of Yao Fei’s surviving daughter, Shado.

The peacetime at Lian Yu did not last very long, as Oliver and Slade gained a new enemy; Dr. Anthony Ivo. Ivo and his soldiers raided the island, in search of a supposed ‘cure’. Oliver, Sara, Shado and Slade beat Ivo to the punch, and discovered the cure first. The supposed ‘cure’ was called ‘Mirakuru’. Oliver wound up injecting Slade with one of the experimental Mirakuru serum vials, after a near-fatal accident, which caused Slade to sustain multiple burn injuries. Moments after Oliver administered Slade the ‘cure’, Slade’s breathing stopped and he had no pulse.

Slade awoke a few minutes later, calling Shado’s name. He ran after the trio, where he saw that Shado had been murdered. He became enraged, and due to his Mirakuru-enhanced physical capabilities, he completely slaughtered Ivo’s men. He then vowed that the person responsible for Shado’s death would suffer.

Slade, Oliver and Sara attempted to take over Ivo’s ship ‘The Amazo’, but the mission went south when Slade overheard Oliver’s confrontational conversation with Ivo about how Oliver chose to save Sara instead of Shado. Slade turned his rage to Oliver, and from that moment forward,

Oliver was no longer a friend of Slade’s. Slade vowed that he would make Oliver suffer for what he had done. Oliver and Saraeventually returned to ‘The Amazo’ with the intention to permanently put Slade down for good. After an intense battle of hand-to- hand combat, Oliver presumably killed Slade by stabbing him with an arrow into his eye.

In a surprising twist during Season Two of Arrow, we learned that not only was Slade Wilson extremely alive and well; he had a plan set in motion to completely destroy Oliver’s happiness. Slade proved himself incredibly resourceful, finding a way to plant a spy of his own, Isabel Rochev, inside Oliver’s family-owned company Queen Consolidated. He also planted one of his own men, Sebastian Blood, in the mayoral race for Starling City. His sources proved to be extremely unlimited, as he slowly caused Oliver’s life to fall apart. Slade kidnapped Roy, and injected him with the Mirakuru serum. Roy’s body was unable to properly process it, and Roy went on a rampage through Starling City and he even wound up killing a police officer. Slade also kidnapped Thea, which sent Oliver into emotional distress, resulting in him unintentionally signing his company over to Isabel Rochev. Just when Oliver thought things can’t get any worse, Slade kidnapped Oliver, Thea and Moira. Slade set both Moira and Thea up in front of Oliver on their knees, telling Oliver that he had to choose which one he wanted to live, his sister or his mother; replicating the scenario where Oliver and to choose between Sara and Shado.

Moira stood up, and begged Slade to kill her and let Thea and Oliver go. Slade complimented Moira’s courage and bravery, and told her that is a shame she did not pass that onto her son. He then impaled Moira with his sword, killing her.

Moira’s death sent Oliver into a state of depression, and Oliver actually considered turning himself into Slade. After a motivational speech from his teammates, Oliver regained the courage he needed to face off with Slade once and for all. However, Slade was not alone. He replicated the Mirakuru serum, and disseminated it to various thugs in Starling City, creating his own ‘Mirakuru Army’ of super soldiers. Oliver acquired the cure from a lab in Central City, and he teamed up with the Nyssa and the League of Assassins members to take down Slade’s army. While Oliver was distracted with defeating Slade’s soldiers, Slade kidnaps Felicity, after watching a video in Queen Mansion of Oliver telling Felicity that he loved her. This comesas an extreme shock to Slade. Earlier, he kidnapped Laurel, under the impression that she was the woman that Oliver loved. I guess in Slade’s mind, by having both of them, he couldn’t possibly be wrong.

After the army is defeated, Slade informed Oliver that he had both Laurel and Felicity and Felicity in his capture. Oliver met up with Slade and he attempted to talk Slade down. He told Slade that the real Shado (not Slade’s twisted hallucinations of her) would be horrified with what Slade had become. While Oliver distracted Slade, Felicity pulled out a hidden syringe and turned around and injected Slade in the neck with the Mirakuru cure, taking his strength away. Oliver fought Slade one last time, before finally defeating him.

Slade was then sent to incarceration in an A.R.G.U.S. supermax prison on Lian Yu. As Oliver walked out, after paying Slade a visit, Slade angrily yelled to him that he keeps his promises, implying that one day he intends to uphold his promise of vengeance on Oliver.

Personality
Slade is intelligent, calculating, resourceful and cunning. Pre- Mirakuru Slade was a man of honor and good morals, who occasionally
puts on a tough guy act, but underneath is really a caring individual.

Pre and Post Mirakuru Slade do not take well to traitors, and he only trusts and cares for people who have proven themselves trustworthy
to him. After all, he did not hesitate to kill Sebastian Blood when he learned Sebastian betrayed him by delivering the Mirakuru cure to Oliver.

Currently, his personality is so tainted by anger and revenge, that there is hardly anything left of the man he used to be.

I love this character so much, and I really hope that at some point in the future, we will get to see him return. Manu Bennett was absolutely fantastic, and Deathstroke is still the number one villain that I have seen in Arrow so far.

Arrow returns Wednesday, March 12th with the episode ‘Monument Point‘ at 8PM/EST on The CW.