It is coming to that time of year, when our favorite CW-verse shows assemble together and start working on the upcoming, much anticipated next season. 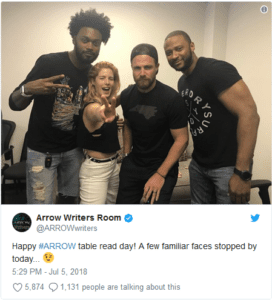 Last season, Arrow ended with Oliver Queen in federal maximum facility prison, serving a life sentence after revealing his identity as the Green Arrow.  The season seven premiere episode, which is titled ‘SuperMax’ will likely focus on Oliver’s incarceration.

While the Season 7 premiere episode is still a few months away, we can look forward to the panels and other announcements for the show which will be airing at San Diego Comic Con (SDCC) later this month. Here not only will we be getting some more updates on the show, but also – the much anticipated sizzle reel and even premiere teaser photos!