Before Batman V Superman: Dawn of Justice was even released the internet was abuzz with Darkseid talk. Darkseid is one of the be all end all bad guy in the DC Universe. He is a New God from the planet Apokolips, one of the most powerful beings in the DC Universe he is intent on conquering the universe and eliminating free will as he goes. There was lot of imagery in Batman V Superman that pointed to Darkseid being the force that brings The Justice League together. Most of that came from the Batman Knightmare scene, the omega symbol, the crumbling city, and the Parademons. 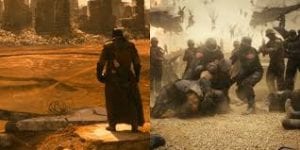 One of the deleted scenes that Warner Brother’s released at the end of March called Communion,we see Lex in the pond of goo that created Doomsday. It isn’t only Lex you see though but an alien looking creature, who some people say may be Darkseid’s uncle Steppenwolf. In addition to being his uncle Steppenwolf is also one of Darkseid’s Elite and leads the army of Apokolips.
The creature we see in the deleted scene doesn’t exactly look like the comic version of Steppenwolf we have seen, but his head is shaped very much like the helmet Steppenwolf wears. 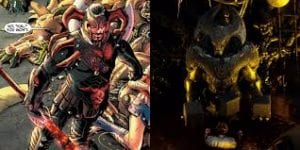 One thing is sure though the alien we see is holding a couple mother boxes, which look a lot like what we saw floating in the STAR labs footage in our Cyborg sneak peak! So is Steppenwolf just acting as an intermediary for Darkseid, or will Justice League Part 1 be the fight against Steppenwolf? With reports of none of the Green Lanterns appearing in the Part 1 it would make sense to save the biggest and baddest to draw the attention of The Guardians of the Universe and for them to send in the green guns. This would raising the stakes of Part 2 and set up the Green Lantern Corps movie set to release the year following part 2.

Home » Movies » Are We All Wrong About The Justice League Villain?