The DCU has been gradually working on expanding their movie franchise over the past few years, and now, we can officially say it is continuing to grow. When Batman V. Superman: Dawn of Justice was released, we got a very brief glimpse of The Flash and Aquaman. An Aquaman movie has been in the writing stages for some time but now, the cameras are finally rolling. 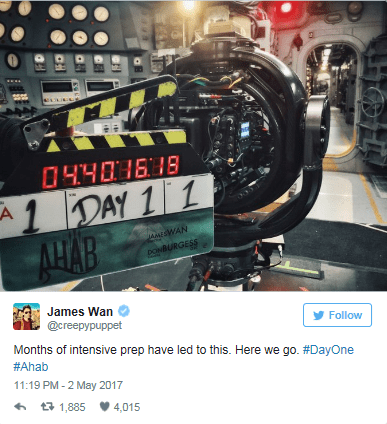 It is going to be extremely interesting having James Wan direct the upcoming DC Blockbuster. Wan has been known for his works in the horror film industry, having directed Insidious and The Conjuring. I’m interested to see the twist that he’s going to be bringing to the Superhero Universe.

Jason Mamoa (Stargate Atlantis, Game of Thrones) will be playing Arthur Curry, and he will be joined by a pretty stacked A-List cast. Amber Heard has been casted as Mera, wife of Aquaman. Patrick Wilson will be picking up the role of Prince Orm, Aquaman’s brother and also known as the Super-Villain ‘Ocean Master’. Nicole Kidman and Temuera Morrison will be Aquaman’s parents, King and Queen of Atlantis.

Recently, Dolph Lundgren was added to the cast, as King Nerus. Yahya Abdul-Mateen II has finalized the role as Black Manta, sworn and archenemy to Aquaman.

Although we do not have a predicted release date at this time, we are nonetheless ecstatic to see that this film has finally hit the ground running…. or ocean floor running I guess you could say.