Aquaman And The Lost Kingdom is entering production now, and fans are really excited. With the small hiccup of the Amber Heard drama on social media, fans are actually freaking out. The hype has really been setting in since director James Wan revealed the film’s title. Now Black Manta actor Yahya Abdul-Mateen II posted a picture on social media of him prepping for Black Manta’s return.

The photo doesn’t reveal any secrets, but it does show that the actor is back to work. Or will be very shortly. Abdul-Mateen was really awesome in the first Aquaman film, even though he wasn’t the main villain.

The photo in question is of the actor laying in bed. He’s on the phone and has a binder in front of him. What does this binder contain? We may never know, but we know it probably has to do with Aquaman 2. That’s what the photo is captioned, anyway!

We’re just having a little trouble embedding Instagram posts into our articles, so I posted a screen capture of it. I am going to, however, also include a link to Abdul-Mateen’s Instagram account here! 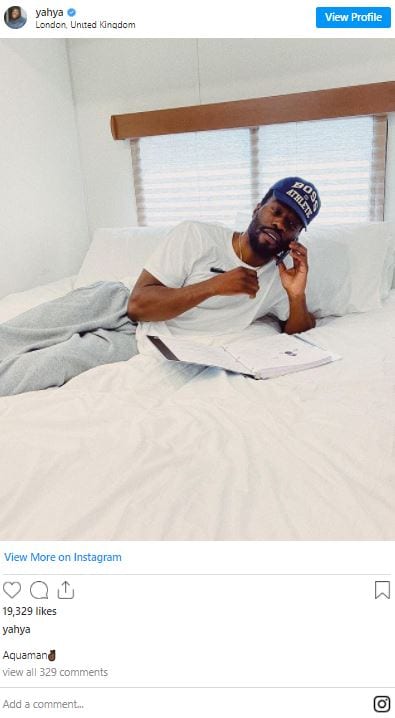 In a previous interview with ComicBook.com, the actor discussed his character’s future in the DCEU. It was a pretty interesting interview, and he seems to think his character can easily slide into any Aquaman storyline.

“Anywhere where he has a device or plot to get back to Aquaman, he’s going to use it. So, he can show up wherever. But when he does I hope that we get to see more of his wit and more of the comedic parts of Black Manta and see more of the things that make him [the Black Manta] that I know and the human that the fans, and the people in this universe, have grown to love over the years.”

The Aquaman 2 writer, David Leslie Johnson-McGoldrick, tweeted about the storyline of the film last year. He eventually had to delete it, though. For obvious reasons.

He said this while responding to a follower. “Hmm…good question. We’re not taking any one particular comic book story and adapting it, but if you want to know the vibe we’re going for, pick up pretty much any Silver Age story featuring Black Manta.”

You’re probably when you’re going to get to actually see Aquaman And The Lost Kingdom, by now! The film has a release date for December 2022, and Abdul-Mateen hopes it doesn’t get delayed. At least, that’s what he previously told Entertainment Weekly.

“We have a date of December 2022. Hopefully, that will hold. Black Manta will be back — I feel confident in saying that. I’m excited to step into that world again and cause some more trouble. I really want to add more personality and more character to David Kane and flesh him out in Aquaman 2 and give him more of a journey.”

Home » Movies » Aquaman And The Lost Kingdom: Yahya Abdul-Mateen II Posts Photo On Social Media Of Him Getting Ready For The Film!