The Aquaman 2 title is revealed, James Wan, the director, revealed it himself earlier on Thursday. James Wan was at a production meeting, where there were undoubtedly getting ready for producing the sequel. That’s where he revealed the title for the new film.

Aquaman 2 is titled Aquaman And The Lost Kingdom.

The title was revealed by James Wan on Instagram, where he posted a picture from the meeting. The picture features the film’s title over the backdrop of an ocean, which is pretty cool! 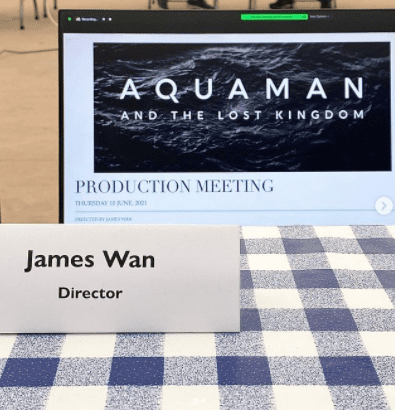 In the comic books, this is actually where Mera (Amber Heard) is from. DC Comics has actually gone and done a few interesting things with them over the last year. Whether or not that’s what it is for the film, though, remains to be seen.

One piece of information that could potentially help us piece it together comes from the Instagram post itself. The picture is captioned “The tide is rising.” which is leading some fans to speculate Atlantis could rise. We mean that quite literally too.

For now, we’ll just have to keep speculating since we have no actual way of knowing for sure. Whatever ends up happening the first Aquaman film was pretty awesome, a high point for the DCEU, and we hope the second is as well.

The second film’s story, we know, will be quite personal to Jason Momoa. That’s because he actually helped come up with it and write it. He said as much on the Drew Barrymore show.

“After we ended the first one I went in with my writing partner and we dreamed up the second one and we went in and pitched the idea. The best thing I can give you is that I love it so much that I participated in the writing of it. And so, we did the first treatment and then James and our original writer David finished it off. And all of our hearts are in it. Instead of just like getting a script and doing that, you are 100% being encouraged by your director and co-writers. So that’s exciting for me and I’m excited to go over there. I leave in July and we start filming.”

Are you as excited for Aquaman 2 as we are? Are you at least glad the Aquaman 2 title is revealed? Let us know in the comments!