The doll from The Conjuring and Annabelle is back! Annabelle: Creation, the next installment of The Conjuring franchise, is a prequel, taking us back in time to see the origin of the demon creation named Annabelle. Due out in theaters August 11th, the film premiered this week at the Los Angeles Film Festival to mixed reviews. 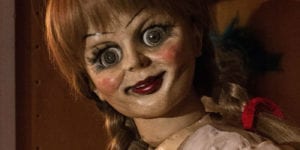 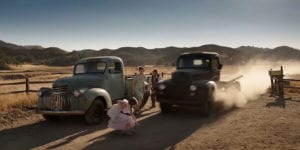 Synopsis: Annabelle: Creation explains the mythology of the ghostly and supernatural activities investigated by Ed (Patrick Wilson) and Lorraine (Vera Farmiga) Warren in The Conjuring movies. The film shows us how this creepy doll came to be possessed by some kind of demon, who tricks a couple who are grief stricken by the loss of their daughter, to transfer an ancient evil spirit into the creepy old fashioned doll. In an misguided attempt to pay for their mistake, the couple decides to become a group home of sorts, for some orphan girls, one of who becomes the next target for the demon doll, named after their dead little girl, Annabelle. Sounds like a good plan? Yeah, I don’t think so either!

David Sandberg (Lights Out) directs the thriller, and gives us a jump-scare filled movie that does not have as much horror as one would expect from the R rating. Surprisingly, Annabelle’s demon offs less people than you’d think. If Sandberg had made the kills a bit less gore-filled, the movie might have ended up with a PG-13 rating — which seems perfect for a movie where the majority of characters are young. That being said, he does what he does well, and the build-up of tension in the movie is intense! Actors whispering instead of speaking at a regular volume, made me lean in and try to listen and bang- he’d get me! The lighting is beautiful and Sandburg is skilled at manipulating the composition so that we are constantly looking for little things to be in the shadows, heightening the suspense. At moments there wasn’t even a score, everything became ominously, deadly silent. 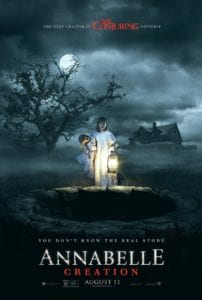 I enjoyed The Conjuring movies, but was not a big fan of the first Annabelle. I think Annabelle: Creation did a great job tying the story together, and is a much better film. I loved LuLu Wilson (Ouija: Origin of Evil) as Linda, and Talitha Bateman as Janice. Both are talented young actresses! I think this will be a great summer horror flick, absolutely worth going to see. Perfect for date night, so you can hug your sweetie through the scares!

Annabelle: Creation will be in theaters on August 11, 2017! Are you up to see what happens with this creepy doll?