If you love zombies, musical, and super fun films, then without a doubt, you will love Anna and the Apocalypse!

The film stars Ella Hunt, Malcolm Cumming, Ben Wiggins, Sarah Swire, Christopher Leveaux, Marli Siu, Mark Benton, and Paul Kaye and explores the zombie apocalypse at Christmastime. The synopsis for Anna and the Apocalypse reads as follows, “A zombie apocalypse threatens the sleepy town of Little Haven – at Christmas – forcing Anna and her friends to fight, slash and sing their way to survival, facing the undead in a desperate race to reach their loved ones. But they soon discover that no one is safe in this new world, and with civilization falling apart around them, the only people they can truly rely on are each other.”

We chatted with film director John McPhail in celebration of the film’s home release. He took us inside his vision and process while filming this unique multi-genre film. 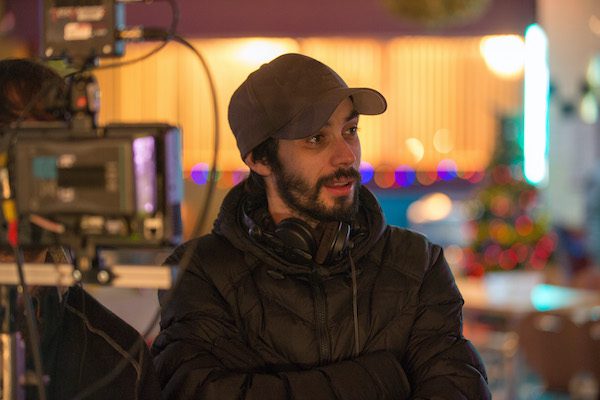 Denise Caputo: Hi John! Thank you so much for taking the time to speak with me today. Anna And The Apocalypse is officially available to own on DVD, and the film is such a unique take on the zombie genre. Tell me a little bit about where the idea came from for a story like this.

John McPhail: I don’t know if you’re aware, but the original idea was the brainchild of a guy named Ryan McHenry. Ryan wrote and directed a short film called Zombie Musical. It was his graduation film from University. He was watching a trailer for High School Musical, and he thought, “what would make this better is if zombies turn up and ate Zac Efron.” So, that was where the initial idea originated. The short film was made back in 2010, and it won a new talent BAFTA. It was picked and it was developed into a feature film. Unfortunately, Ryan was diagnosed with a type of bone cancer that only affects young people, and unfortunately, he passed away in 2015.

So that’s where the initial idea had come from. The film was being developed by Ryan and his co-writer Alan McDonald. When Ryan passed, Alan took on the writing of the film full time himself. It’s one of the reasons why there’s a real connection with the loss of youth, and it’s something that we wanted to make sure was quite apparent in the film as well.

DC: Oh, wow. That was a brilliant idea to start with. When you think of zombies or horror and musicals, those are completely different genres that really shouldn’t work together, but in Anna And The Apocalypse, it does work. What was your process like directing a multi-genre film like this?

JM: Initially, it was quite daunting because I’m not the biggest musical fan. In fact, before this film, if you’d have said to me, “We’re going to go and see a musical,” you’d have been dragging me kicking and screening. My favorite musical is actually South Park: Bigger, Longer, and Uncut. So, that was the side of it which had me a bit scared. I realized quickly that, “Hey, I’m getting characters to be able to sit and tell the audience their inner thoughts and feelings. this is amazing!” Monologues, you’re never allowed to get away with that in film usually, or a voiceover. So, I thought, “that’s going to be a really great way of building character development.

Then, I took the film, and I split the three acts up. The first act was a zany teen comedy. We were spending the time getting to know these kids, know their wants, desires, and who they are so that by the time the zombies turn up, you’re rooting for them. You understand who they are, and you like them, and you want them to survive. I knew that the horror would come from losing these characters later on in the film. The second act was like a horror-comedy up till the mid-point, where I knew we would have to introduce a bit of drama because the latter part of the film was going to get darker. It was trying to split those three acts up. So, we have the zany teen comedy, the horror-comedy, and the third act could be outright horror, and feeling a concern that we’re going to lose these kids on the way. I thought that would be the best way to do it. It gives each of the genres a place to, as I say, help developed through the characters in the story. 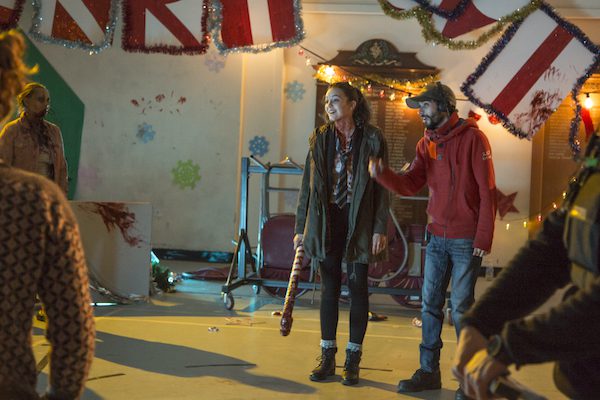 DC: That’s an awesome approach. And just to add another genre to the list, the film also takes place during Christmas, which is a fun idea. I don’t think it’s something that has been done with zombies; to have it set during a Christmas or winter. It adds a little bit of whimsy to the production. How did setting the film with a Christmas backdrop impact your vision for making the film?

JM: For me, I loved the idea of it being Christmas. See, my mum; She loves Christmas to the extent where the rest of us are all like, “Oh god, here comes Christmas.” So, for me, I felt like this was a great opportunity for me to take all my frustrations of Christmas out. I love a dark Christmas. I do love a dark Christmas. Gremlins is my go-to for Christmas cheer. I wanted this to be like this generation’s Gremlins; Something that felt like a fun story, but there was some real darkness to it as well. Also, I love color. I just love color, and the opportunity to take Christmas and turn it sinister was something I was very interesting to me.

So, in the first act, we kept those bright yellows, blues, and greens, and kept the black level on the floor so that everything was nice and bright and colorful. Then, I would start to increase the black level throughout the film, showing that there’s an increase in drama. The colors when we get into the third act; they change from those greens and blues and yellows to sort of peaches and turquoises. Again, showing that there’s been change throughout the film.

DC: And that works so well! Now, zombies have been making a resurgence over the past several years in pop culture with successful zombie-themed shows like The Walking Dead, Z Nation, and i-Zombie. The zombies in Anna And The Apocalypse are somewhat different from the standard vision. Where did you draw inspiration from when making Anna And The Apocalypse?

JM: One of the first things I always wanted to stay away from was the 28 Days Later zombies, So no running, or even Zack Snyder’s Dawn Of The Dead ones because we had these musical numbers I wanted to keep them slow. What we tried to do was create a sort of infection look and put a little bit of color into their skin so that they weren’t grayed out zombies. There was a bit of jaundice to them, a bit of yellow through the skin. Again, it was just so to keep that color going. There are these different incarnations of zombies, and we made the decision early on that we wanted ours to be slow and more tied in with the Night Of The Living Dead origins of zombies. We didn’t want to explain anything like this is the outbreak and the cause of it. In those older zombie movies, nobody ever explains why it’s there, it just happens, and that’s our take on it. 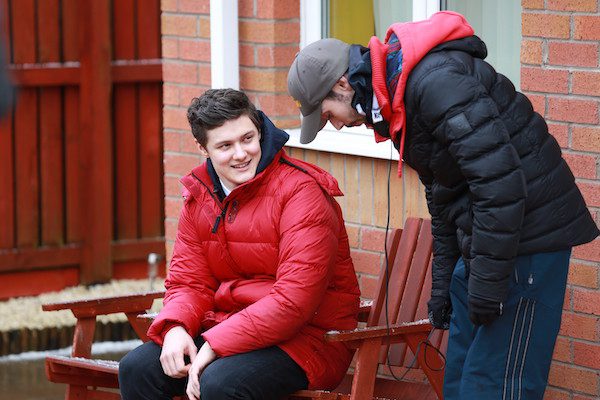 DC: Love it. So, talk to me a little bit about the music and the songs that are interjected in the film. How difficult was it to shoot those musical scenes?

JM: The music, I just think is amazing. Roddy [Hart] and Tommy [Reilly] have done such a good job. The two of them are singer/songwriters, and they hadn’t ever done a musical before. They’d never scored a film before, so it’s a total credit to them how good those songs are. The shooting of them, there were a couple where we were able to have a bit of rehearsal time, so Hollywood Ending, we rehearsed to an inch of its life, and we got to shoot that. Then, other ones were more done on what we call “on the hoof.” We had ideas of what we were doing with them. I think Solider At War was one of the most difficult ones to shoot just because it was outside, and it’s in Scotland. We have five seasons in one day. It was difficult matching it, especially when you’re doing it over two days, and it’s just hard to get the sky right and everything else. So, it was difficult when we were outside shooting stuff because of the weather. In fact, we had an original opening song that we ended up having to completely bin, just because we got the worst weather possible throughout it. It was horrific, so we ended up having to cut an opening number because of that.

JM: I’ve got a whole bunch of stuff in development at the moment, but nothing solid that I can share. The reason we made this film, Anna and the Apocalypse, is we wanted to tell a fun story, but also to entertain audiences. We just hope that this is a film that the audiences are going to enjoy and enjoy over again during the Christmas period and even Halloween.

Thank you, John McPhail, for chatting with us about the delightful zombie-musical Anna and the Apocalypse. The film is available now on Blu-ray, DVD, and Digital! 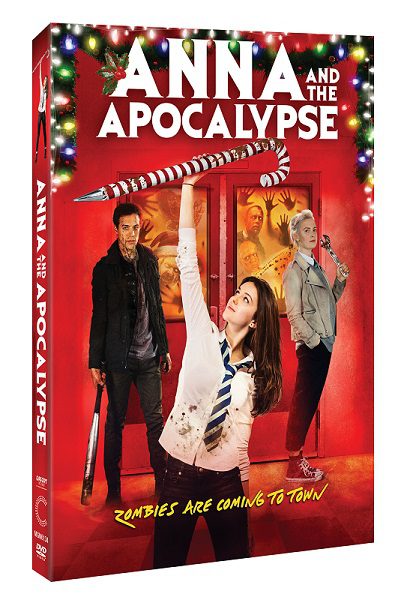