The words “zombie, and musical comedy,” are most likely words that you wouldn’t associate with each other, however, how awesome would it be if a zombie musical comedy story existed in real life? If this idea excites you, then you’re in luck! A brand new film called Anna and the Apocalypse is bringing music to the zombie apocalypse and zombie hunting to the Christmas holiday!

Directed by John McPhail, the film stars Ella Hunt, Malcolm Cumming, Ben Wiggins, Sarah Swire, Christopher Leveaux, Marli Siu, Mark Benton, and Paul Kaye. The synopsis for Anna and the Apocalypse reads as follows, “A zombie apocalypse threatens the sleepy town of Little Haven – at Christmas – forcing Anna and her friends to fight, slash and sing their way to survival, facing the undead in a desperate race to reach their loved ones. But they soon discover that no one is safe in this new world, and with civilization falling apart around them, the only people they can truly rely on are each other.”

In addition to the upcoming film, co-authors Katharine Turner and Barry Waldo are bringing Anna’s story to life in book form. During New York Comic Con, we had the honor of speaking with Barry Waldo about the new book. (available to purchase right now) as well as the upcoming Anna and the Apocalypse film.

Denise Caputo: Thank you so much for speaking with me today. At Fan Fest, we love everything about the zombie genre, so we’re excited about Anna and the Apocalypse. Was the book inspired by the upcoming movie? Is it a supplement to the film?

Barry Waldo: My pleasure! The book is based on a screenplay by Alan McDonald and Ryan McHenry. We had that screenplay to work with as a guiding light, so to speak, for the book. It was incredibly fortunate that we were able to be involved with the entire making of the movie before actually writing the novel. So, it was always an incredibly integrated experience. I first became involved with the project before the film even being shot. That allowed me to be on set, off and on. I was able to be involved with the actors and talked with the director about their roles and characters. I was able to be in meetings about the edits and the cuts and every single part of trying to bring the film to life. To be able to be an author with that knowledge hopefully makes the book a lot stronger. It was so important to us that it was an incredibly integrated process with the creative narrative that was part of the origin of it all. 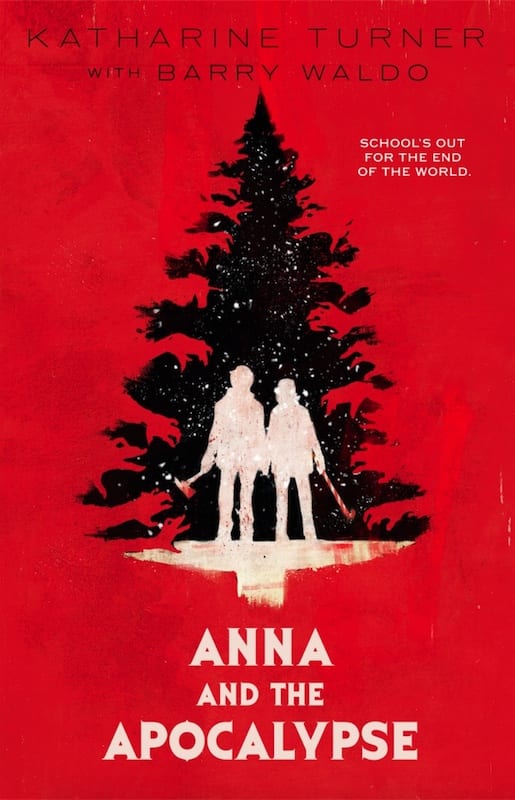 DC: How did the whole idea behind this whole story come to be? I read online that the idea started with a conversation you had on a train. Can you talk a little bit about that?

BW: My spouse is the production designer on a TV series called Outlander which is also based on a very famous book series by Diana Gabaldon. We moved from Los Angeles to Scotland to be involved with that project. At the time, I was working for will.i.am from the Black Eyed Peas and moved over to London because there’s quite a bit of activity there for work. I was taking a train from London up to Glasgow, in Scotland, for the weekend to see him. At that time, I met an incredible, bright young gentleman named Naysun Alae-Carew, and we struck up a conversation that lasted for four and a half hours! Naysun is one of the lead producers of Anna and the Apocalypse and was just coming back from an early casting session. At the end of the train ride, he was like “Hey, you should just come to hear some of our temporary music tracks, meet the music composers, and meet some of the team. It sounds like you might be able to give us some advice. We would just love to pick your brain.” It was one of those things where you ask yourself, “Do I? Don’t I?” It sounded great on the train, but then the weekend comes around, and you’re like, “It’s Monday, did he really mean it or not?”

Low and behold, I put their address into Google Maps, and it was literally four blocks away from where we live in Glasgow. I thought to myself, “That’s just serendipitous. I just have to stop by!” That’s where it all began. I met Roddy Hart and Tommy Reilly who are the composers and lyricists for all the songs in the movie. I can’t say enough about how brilliant they are. They played some of the songs for me, and I guess you could say I was bitten.

DC: Nice! The zombie genre has gained even more attention lately with popular TV shows like The Walking Dead and iZombies, Z Nation. How do the zombies in Anna and the Apocalypse differ from what we’ve already seen or what we are already familiar with on the screen?

BW: Well, I guess I would start with the question – How many zombie Santas or snowmen have you seen?

BW: Exactly. The real unique overlay for this particular story has to do with that it takes place during the Christmas season. That allowed us to have some significant fun. If you imagine all the people that you interact with during that season, and with some of them getting bitten and becoming zombies, it gave us a new creative platform for the genre to dive into. The thing with the zombie genre is just how over oversaturated it can be. We took that very seriously. John McPhail, who is the Director of the movie, had a vision for how to do this in a unique way. Being part of that journey with him allowed us to hopefully tell the story in the book in a similar manner.

DC: That’s exciting! So, we know it’s a horror comedy musical which, those things don’t always go together, and when they do go together it has to be done just right. So, as an author what do you think is more difficult to write, horror or comedy? Then putting them together, what is that process like?

BW: Oh, what a question! Horror is interesting. I never thought my first published work would be a zombie-based concept. I found that you have to get really creative with all the different ways you can kill people or zombies pretty quickly because that can run its course.

The comedy piece was by far the bigger challenge for us in the book, particularly because it’s a young adult novel. We wanted to keep the comedy enhanced, and in the book, really highlight it even more so than in the movie. So, we spent a lot of time doing that. The challenge was balancing the British humor with American humor, which is no small task as an American living in the UK! Then, add on to that the Scottish environment in part of the story, and that’s a whole other level of humor. We kept trying to merge the two. Katharine Turner, my co-author, is a British person living in Los Angeles, so we had basically swapped roles. We had so much fun playing with the humor. We had to make sure we explained certain words, like if you’re talking about a Christmas jumper that’s actually a sweater. We had to try to find the right balance, and hopefully, we did.

DC: I’m sure you did. Earlier, we talked about the zombie genre and how this story stands out from what we’ve seen before, but I’m sure you used past works for inspiration in the book and film. Where did you draw your inspiration from for Anna and the Apocalypse?

BW: We drew inspiration from several places, not just from that genre. For example, Shaun of the Dead was an inspiration to us. It’s just so brilliant. Also, as we were going around the festival circuit, we were in Sitges in Spain, for the second screening ever of the movie and Susan Sarandon was there for a screening of Rocky Horror Picture Show. Our film played like at two in the morning right next to Rocky Horror, and she was there, and our whole team was just giddy with delight. That is a massive inspiration for this concept because it has music in it as well. Then, at some of the more recent festivals, Jamie Lee Curtis has been taking Halloween out. We’d just sit around with our jaws open, just so in awe of what those iconic women have done in the genre, so with our female-led Anna and the Apocalypse; those were probably our biggest inspiration.

BW: Well, most importantly, please see the movie and buy the book because our team is so incredibly passionate and we are really excited about the potential to do both a video game based on the concept, and then also look into bringing Anna and the Apocalypse to the stage. When you see the movie, you’ll see it’s so perfect for live entertainment and stage performance. Mark Benton, who plays Tony, Anna’s father in the movie, is a stage actor. Also, Paul Kay who’s in the movie – there’s a lot of background in musical theater. Some of our actors are London-orientated live stage performers, and so the cast really is interested in doing it as a stage show as well. We’re interested in having conversations about what remakes, prequels, and sequels could look like but, of course, we don’t want to get ahead of ourselves. That’s all going to be based on the success of the movie which opens on November 30th and how the book performs, starting October 23rd.

UPDATED! Anna and the Apocalypse is singing and slashing its way through the US starting TODAY! Don’t miss the festival darling critics are calling a “feel-good Christmas hit”. Get your tickets now! https://t.co/NdMeQJgPLr pic.twitter.com/dG6siPTsSn