The church job finally goes down this week on Animal Kingdom. Craig also goes down, on his bike, after a bender.

Smurf is training Josh to shoot. Apparently he needs to be able to take out on entire terror cell. He is training in a paramilitary looking simulation town. 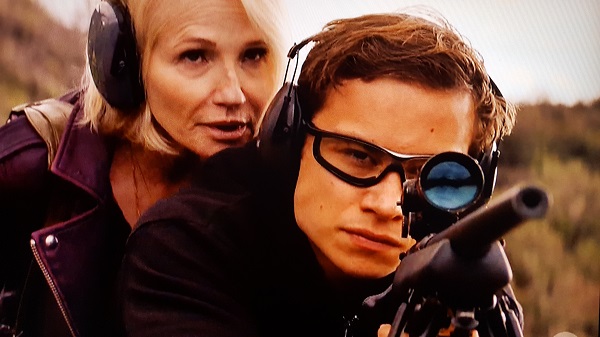 Lucy shows up again. Baz has the $15K for fencing the necklace her brother stole. She expected only $10K. Baz says his new contact is just starting out, and they’re always honest with they start out. Did Baz front the money to impress Lucy or is this new contact actually working out for him?

Smurf gives Josh Daren’s old room. The room shares a bathroom with Nicky’s room. What does Smurf have planned there? 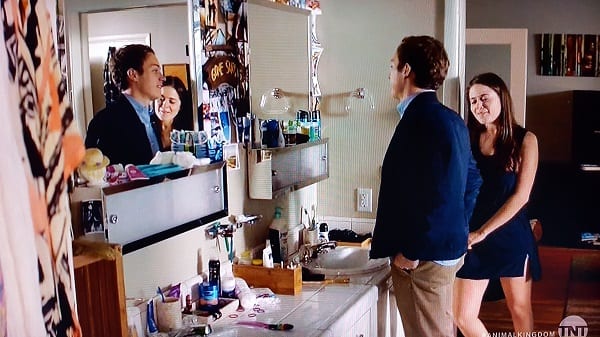 Pope, Baz and Josh all attend church service to start the job. Baz and Josh plant a tracker in the donation plate to watch when the money arrives at the safe. Baz is shocked that Pope has a woman hanging off of him at the church. 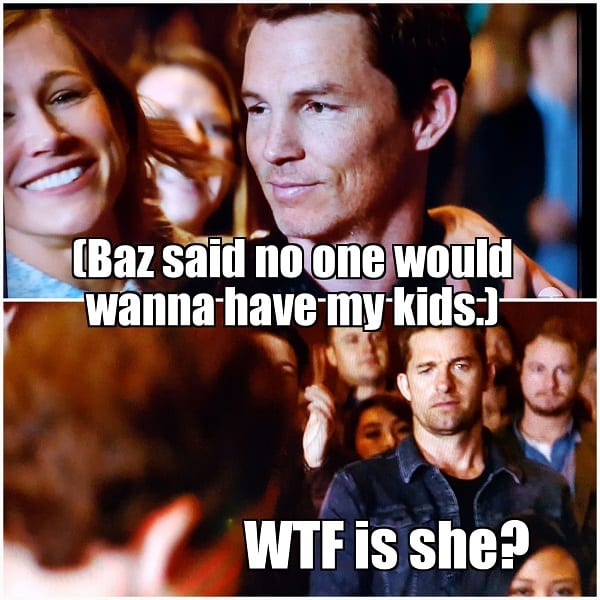 Then Josh and Baz hide out in the air ducts waiting for Bible study to end and the church to be locked up.

Craig is still crashing at the bar’s storage room. He’s still upset about the church job and Deran is sick of Craig’s attitude and his drug use. Deran calls Craig a piece of shit. 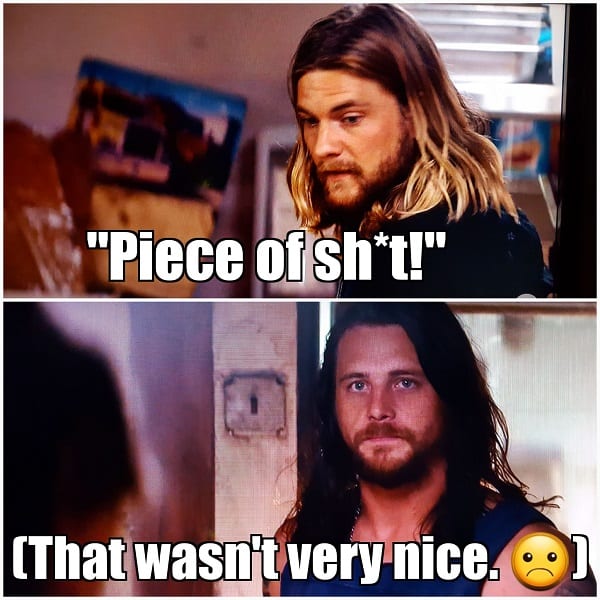 Craig goes to hang out at Smurf’s to get away from the attitude he’s getting, only to find Nicky has turned on him too. She gives him an earful for not helping his brothers on the job. 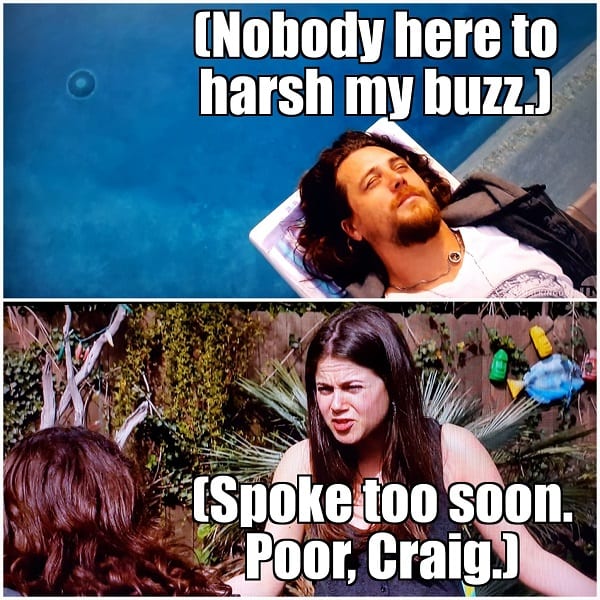 Smurf doesn’t have an opportunity to mess up the boys’ plans because she’s kidnapped by Javier’s gang. They’re in the plumbing truck that had Smurf paranoid last episode. Javier believes Smurf killed his dad. He wants $300K for his silence on the tapes. 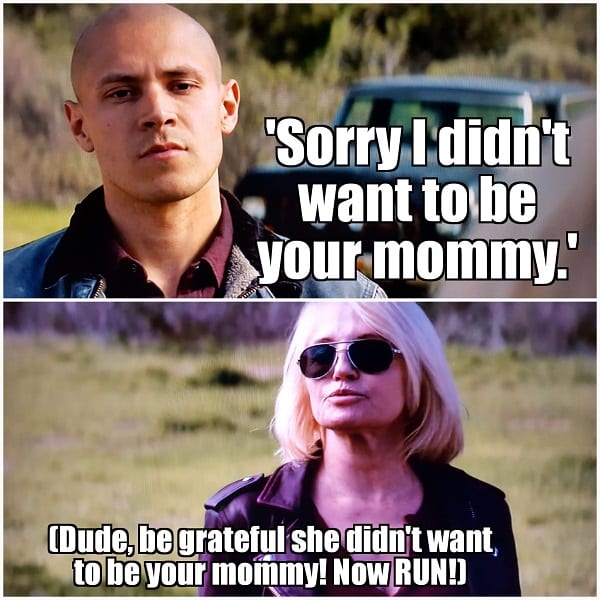 The Arizona gang leave Smurf in the desert. None of the Cody boys respond to her calls due to the church job. She and Craig are on the outside this episode. 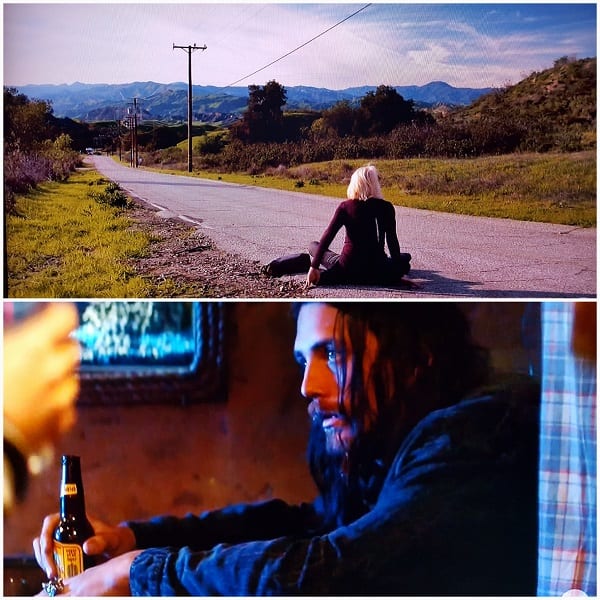 Craig has a change of heart about working the church job. He’s out of his mind drunk when he makes it, so it doesn’t go well when he shows up. He arrives in the church parking lot just as Deran is supposed to pull the church guard away from the security cameras. Deran has to fight Craig off to make him leave.

Pope’s notifies Baz as soon as the Bible study group is kicked out for the night. Pope’s alibi for the evening is set after Amy promises to give him “a reward” for all his good works with the church. 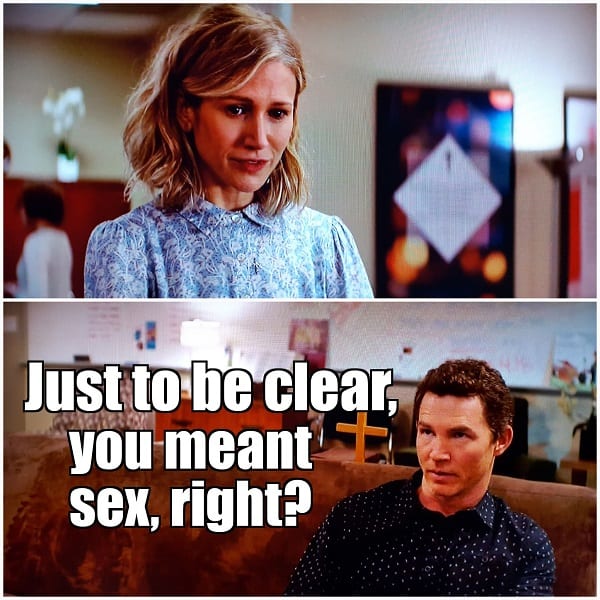 While crawling to the safe room through the duct system, Josh’s leg gets caught. His leg is opened up when Baz pulls him free. Baz is only concerned if Josh’s DNA is in the data base. Despite the delays and mishaps, the guys get out in time.

Josh has used his physics knowledge to calculate the force needed to break the locking mechanism in the safe with a crane drop. It has to be broken open, blow torches won’t work on the metal. He’s right. His education has proven to be a greater asset then the older boys thought.

After the safe is open, the guys tend to Josh’s leg. He has the choice of a blow torch or a staple gun to close the wound. 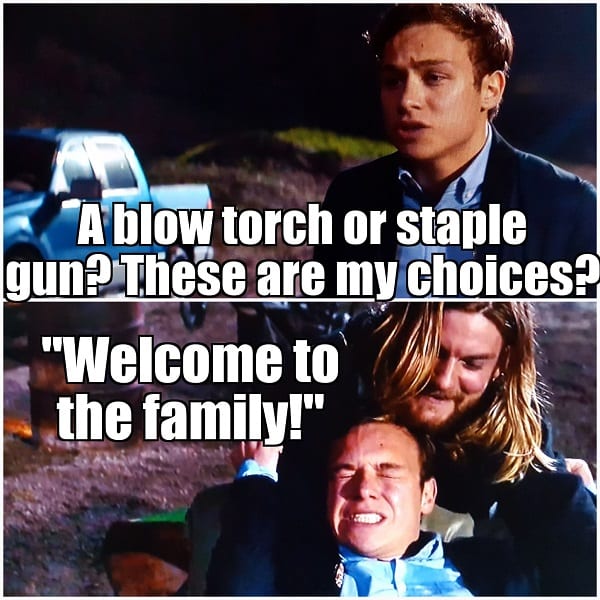 Craig meanwhile, drunk out of his mind, goes on a wild ride and wrecks his bike on the beach after Deran shuts him out of the job.

Nicky helps Josh with his wounds when he returns home. I knew that bathroom would bring them together. 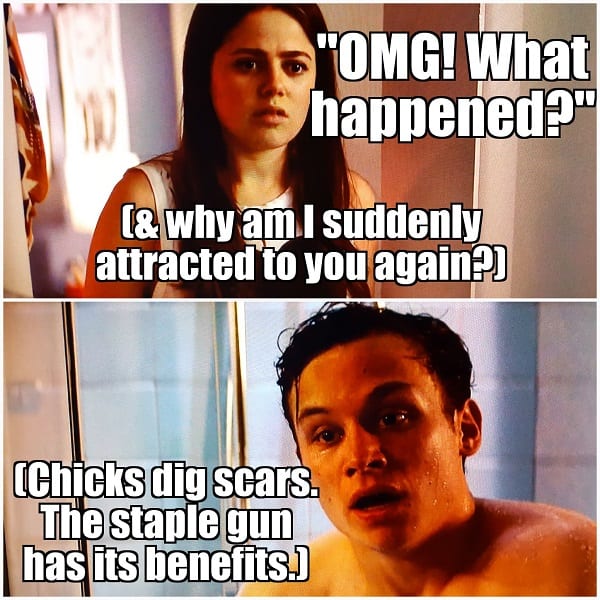 Deran finds Craig is gone when he gets back to the bar. I wonder how long it will take for the boys to go looking for him? 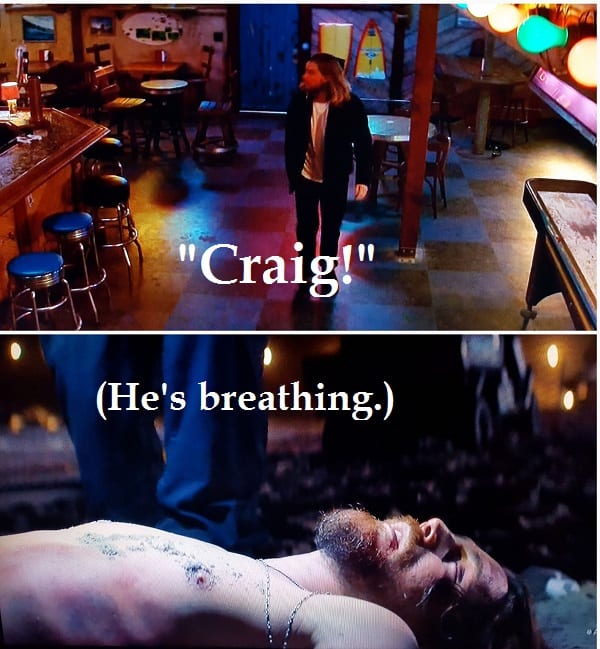 Pope’s solid alibi was an evening of “everything but intercourse” with Amy. He is at her place when the church calls about the robbery. Will Pope be ending the relationship now? Or does he plan on proving Baz wrong? 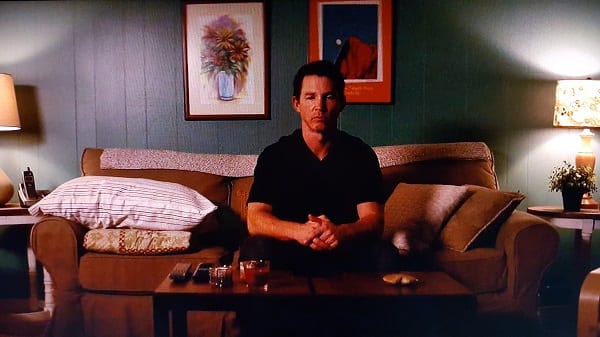 Baz comes home to Lucy. When he wants to fly to Vegas with her, she declines. She has to meet a man in the morning. I bet this “business man” will mean bad news for Baz.

Smurf goes home and confronts Josh. She gives him is gun back and warns him to continue shooting once he decides to shoot. She must be worried about Javier.

How with Smurf deal with Javier? He wanted $300K. Will the Cody boys hand over their newly gotten $300K? Will Josh be on the line for the robbery with his DNA at the scene? Did the police have his DNA from the failed Season One sting? Will the security guard recognize Craig’s motorcycle from the scene? Will Amy piece together Pope’s involvement in the robbery? Find out on Animal Kingdom, Tuesday’s at 9pm on TNT.

To catch up on all of Fan Fest’s Animal Kingdom recaps, click HERE!