After Andrew Muschietti’s re-adaptation of Stephen King’s classic IT completely dominated the theaters last fall, fans immediately began getting hungry for a sequel. Well, maybe that was just me. Either way – the fingers have begun getting to work on this project already, as Director Andrew Muschietti recently posted a photo on his Instagram signifying that it is getting close to that time when the Losers Club returns to Derry: 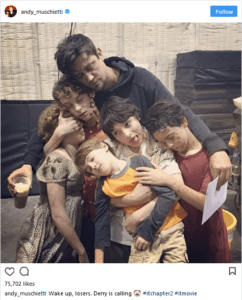 Nothing is official unless it is on social media, right!? The film is slated to arrive in theaters on September 6, 2019 so production for this movie would probably start right around this summer. If there is one thing that we can learn from this photo, it is that Andy is just as exciting and itching to get back set as we are to see IT: Part Two arrive in theaters.

IT: Part 2 has already reportedly begun casting the adult versions of the Losers Club, with Jessica Chastain rumoring to be in talks to play adult Beverly. The other major adult roles haven’t been revealed yet. However, in a recent interview with Comicbook.com, Idris Elba expressed great excitement in playing the role of the adult version of Michael Handlon – who in the book and original TV series is the one to call all the Losers back to Derry to fight IT one last time once rumors of Pennywise resurfacing begin.