The Walking Dead’s seventh season is fast approaching and with each new season comes a new sense of ruthlessness and the desperation to stay alive.  While it seems to get more horrifying as the episodes pass by but the truth is; the show set off to prove that it was a ‘no rules’ and ‘nothing is untouchable’ series from the beginning.

Entertainment Weekly, like many fans of TWD, recently spent some time looking back at key moments of the show’s history leading up to what will go down in history as the show’s turning point when season 7 begins in a few short weeks.  Andrew Lincoln was interviewed first and fans were let in to what was going on not just on set, but in his mind, during the kill of the zombie girl.

Addy (the zombie girl) was amazing and the makeup was phenomenal. I had not met her without all of that, so I was just greeted with this terrifying apparition. I had been quite solitary. I really hadn’t spoken to anybody, just because the nature of the story. So I just thought, well, this a pretty awkward moment because I’m going to have to get a 357 magnum and shoot this girl in about 30 minutes so I better introduce myself. And I said, “Look, I’m really sorry about all of this and I hope you don’t mind that I’m going to have to shoot you.” And I was really upset by this because it was the nature of the scene and I was kind of distressed anyway by the whole world. And she was like, “I’m fine, just get on with it.” And she was 8 or 9 years old at this point and telling me, “C’mon man, get to work. We’re professionals here”. 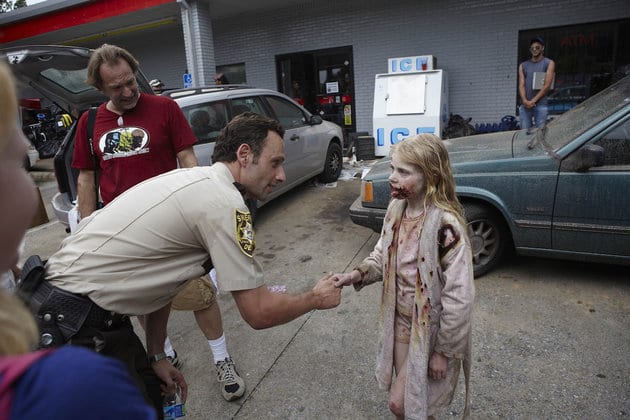 So she was completely comfortable with the entire idea. And I was groveling around, trying to apologize for the next hour, and she was magnificent. I just remember looking over at my in-laws at one point, and they looked gleeful but also extremely confused and disturbed. And I just thought, that’s what we’re trying to do. There you go. Welcome to the family!

A mix of glee, confusion, and being utterly disturbed is definitely what the entire team succeeded in providing with The Walking Dead and as far as an honest look into what a world would be after a zombie apocalypse – the journey has been just that.

Andrew also spoke of the teaser trailer and how at first he almost laughed when he saw it; trying to make sense of what the world was about to see.

If more had been provided in that trailer, or they’d gone a different route and allowed viewers to be lost in the emotion of the show without showing the sick reality of surviving a world taken over by the undead; The Walking Dead wouldn’t be what it is today. The thing is, in that existence, you could always be next. Everyone is one step, trip, injury, altercation, or moment of weakness away from becoming a zombie. In that same breath, everyone is also one moment away from being face to face with a loved one transformed into the undead and the need to pick between love and emotion and saving their own life. It’s raw, real, and puts an unsettling fear in the minds of viewers while still being so entertaining that you want to keep tuning in to find out what happens to characters who were once strangers that have somehow made their way into your own hearts and minds.

From the death of the first zombie girl to now; the road has been dark and twisted but season 7 will bring with it a cloud that never truly goes away, a darkness that even the brightest light couldn’t outshine and in this moment, we’re all sort of like Andrew in that first scene, with the anticipation of something so big just on the horizon.