From CBR.com: USAvengers #1 bounces back and forth between seeing the Avengers dealing with volcanic Secret Empire helicarrier headed for Los Angeles and watching each individual member give an impassioned straight-to-camera testimonial about why they believe in America, and why they want to be a part of this Avengers team.

Cannonball gives a particularly powerful speech, recalling his life as a coal miner’s son, and how his father’s morals and Professor X’s dream had helped shape his own vision of what America can and should be. Unfortunately, Cannonball may not live to see those dreams realized.

USAvengers #1 ends with a teaser for what will be coming in the next year. The teaser shows an appearance by Thanos on something called “Zero Day,” Red Hulk and Deadpool fighting monsters, an appearance by Steve Roger, Captain America, and…the death of Cannonball?

The image shows a tombstone with the words “Here lies Sam Guthrie, Cannonball. He died a hero” inscribed on it. The teaser text simply read, “The ultimate sacrifice…?”

This could be a red herring. Ewing used a similar trick, foreshadowing Sunspot’s own funeral only to later reveal that it was a trick orchestrated by Sunspot himself. On the other hand, it may be the end of the line for Cannonball. 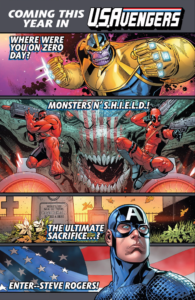