Funny girl Amy Schumer has made us laugh on the big screen and small screen, and now she’s headed to the stage. That’s right, Amy Schumer is heading to Broadway.

This will mark Schumer’s and Key’s Broadway debut. 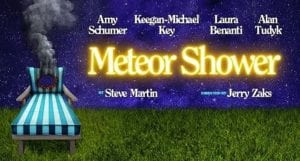 Set in Ojai, California in the early 90s, the comedy follows a seemingly happy married couple Corky (Schumer) and Norm (Tudyk) as they invite another couple, Laura (Benanti) and Gerald (Key), over for dinner. Soon, the two couples launch into a type of psychological warfare and things get weird, in a sexy, dangerous way.

Meteor Shower will open November 29 with previews beginning November 1 at the Booth Theatre.