Love is in the air in the Otto household. Katie (Katy Mixon) and Greg (Diedrich Bader) prepare to celebrate their 18th anniversary, Taylor (Meg Donnelly) and Trip (Peyton Meyer) continue their new relationship even without Katie and Greg’s support and Oliver (Daniel DiMaggio) plans for his first date with Gina.

Greg has all these big plans to show his love for Katie however after last year he has learned she is not into his big grand romantic gestures. After 18 years he decides the best way to show his love is simply to make Katie tacos like he did on their first date. Now if all of the matters of the heart were that easy to deal with. 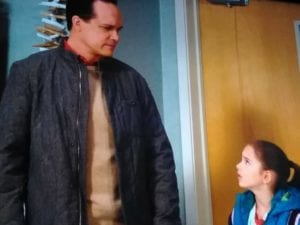 An early morning phone call from the school landed the Otto children in a Russian Roulette on who was in trouble this time and the winner IS….Anna-Kat (Julia Butters). Turns out that Anna-Kat decided to scare her classmates into not buying candy-grams at the schools yearly fundraiser because “Bloody-Becky” who come and rip off their faces when Katie asks why she would do that she explains that last year she didn’t receive a candy-gram. Deciding it is best that the children deal with disappointment directly Greg drops off Anna-Kat on the big day but fearing she would be brokenhearted he takes her home for the day. Katie is having coffee with Doris (Ali Wong) and Angela (Carly Hughes) when they return home. Doris’s is extremely happy to ruin a child’s happiness and returns her to school and is back before her coffee gets cold. However, when Anna-Kat returns from school with candy-grams in hand they are free to move on to how to deal with Taylor and Trip.

Deciding that disapproving of Trip will just make Taylor like him more they decide to “embrace” him and the teenager’s new relationship. Taylor turns the tables when Anna-Kat tips her off to what their parents are trying to do. She invites him to her parent’s romantic taco night anniversary dinner that Greg has planned.

While these romantic plans are being made Oliver confides in Spencer (George Hamilton) he is nervous about his first date with the girl of dreams from his ballet class. Spencer trying to take Oliver under his wing gives him dating tips and even helps plan the evening out for the young couple. Of course, being that Spencer is in his 70’s, rich and been in prison for awhile the night doesn’t go as planned for Oliver and it ends before it even begins. 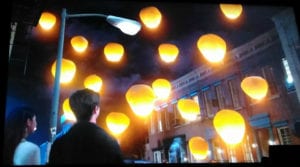 As they are eating their anniversary tacos with their daughter and her boyfriend that they are sure is making her dumber just by dating him, they receive a call that enlightens them as to just which of Anna-Kat’s friends sent her a candy-gram seems they all did to appease “Bloody Becky” but when their son returns dejected from his disastrous first date they decide to do something to help him. Luckily for Oliver, his dad happens to be the king of over the top romantic gestures and that is the sort of thing young girls love even if Katie does not. The one thing Oliver did learn from his brief date was how much she loves the movie ‘Tangled‘ and that was all Greg needed to whip up some romance. The family gathers including Taylor and Trip to help light several lanterns that they release at the romantic moment that Oliver brings the love of his life to the door and she swoons of course.