Summer is OVER and fall has arrived and American Housewife returned September 27th on ABC. It quickly became one of my favorite new comedies over the summer during one of my Hulu binge watching spree.

Katie Otto (Katy Mixon) is the role model to the everyday mom. As my children would say she is Mom Goals or something like that you know because I don’t really listen to them. That was my bad mom humor by the way. So here is my review of the season premiere of American Housewife.

Season Two Episode One: “Back to School” 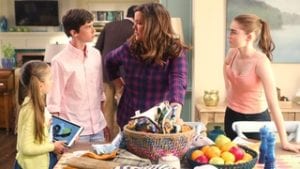 We catch the Otto Family in full bloom of the first day of the school year. All Katie is trying to do is get the kids to school-transferring the prisoners to a different jail to be exact. Of course, just like in real homes across America, nothing is going right. Katie can’t find her keys, the kids are all nipping at her heels with requests for a dog, new ballet tights and a reminder that Taylor’s Drivers test is just two weeks away. Still, there are no keys to be found. All poor Katie must do is find the keys and get them to school so she can get her three-prong plan to achieve her MASTER PLAN FOR FREEDOM into action. Katie is trying to figure out how to get out of the carpool lifestyle and has figured it out but explaining it Greg becomes more stressful than it should be. So, she breaks it down for him so I will break it down for you as follows:

Prong One: Get Anna-Kat (Julia Butters) into an after-school activity club so she will have to stay after school the same length as Taylor’s Volleyball practice. However, Katie somehow gets wrapped into volunteering at Anna-Kat’s school which if you are a viewer it didn’t end well last season as Katie faked a pregnancy to get out of her volunteer duties and went as far as letting the other Westport Moms throw her a baby shower. So, when Katie walks into the school volunteer committee meeting it wasn’t with welcomed arms. At Second Breakfast with Angela (Carly Hughes) and Doris (Ali Wong), they come up with the plan of a social media apology video.

Doris offers to film the video but after Katie goes rogue from the script Doris does some clever editing before she posted it on Facebook. Before long one of the moms show up at the Otto home and asks to speak with Katie outside. She basically brings it to Katie’s attention that it is not the other mothers judging Katie but it is Katie that is judging them. All Katie wanted to do was to get little Anna-Kat into an after-school activity club so that she could finally get out of some tiring mothering roles and she is now facing volunteering AND the fact she has been the one in the wrong this whole time. 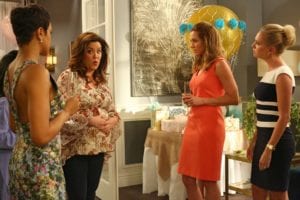 Prong Two: Get Oliver’s(Daniel DiMaggio) ballet teacher to crush his spirit so that he gives up on ballet and wants to quit. He then can join the baseball team so that he will also be staying after school the same length of time as Taylor and Anna-Kat. Katie is still under the impression that Oliver is not serious about his ballet classes that he started taking so he would have a better chance of getting into Harvard.

During one of her “pick up” days she stops in during the ballet class and witnesses the teacher being ugly and rude to Oliver. Well, dear reader, I am the mom to three children and if you want to see just how angry and crazy a 5’4 southern woman can get, say something mean or harm my children in any way and I will unleash a level of hell you would never see coming.

Katie Otto is ME except she is prettier, funnier and has a nicer house but we won’t pour salt into that wound. So, she confronts the ballet teacher about how she had been treating Oliver the teacher calls him spoiled. Katie replies: “Arrogant and Obnoxious I would agree but he is NOT SPOILED”. The teacher proceeds to snort and pushes her way past Katie bumping her backward. Well, it was on like Donkey Kong (yes, I know no one says that anymore but I am UNCOOL we have established this already).

The teacher and Katie getting into a fist fight, hair pulling, knock down and drag out. They scuffled for a while but finally, they both give in and decide to have a beer instead. The ballet teacher apologizes saying that she judged Oliver because he was from Westport which drove home the fact that Katie also judged people who were from Westport without really knowing them. 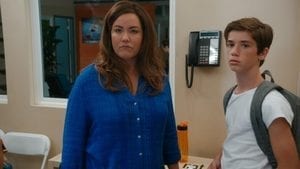 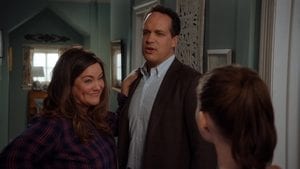 Prong 3: Get Taylor (Meg Donnelly) her driver’s license so that she can then drive herself and her siblings to school and home every day freeing Katie to enjoy her days. Katie has dreams of hobbies like soaking in the tub and drinking wine. However, when Taylor tells them she isn’t going to college Greg (Diedrich Bader) decides that until she finishes her summer packet she would not be taking her driving test. Well, this was a major kink in Katie’s Master Plan so she overrode Greg and volunteered him to teach Taylor how to drive and to convince her to go to college. So, as they are driving along Taylor and Greg have this conversation about how important college is.

Greg who is a professor explains how important college is but Taylor is just not interested in it. This distracts Greg as he tries to teach her how to drive however his stress levels were so high he keeps running over things. Poor Greg all he wanted to do was join the Recycling Club with the janitors and Bill Dorty but instead he listens to Katie tell him why recycling is not real and reasons Taylor does not believe in going to college.

However, those three prong steps just did not pan out like they were supposed. But, that is how it happens in real life. No matter how well you plan something it will somehow become a nightmare quick. So, with her three prongs gone she does what any other mother would do. She stepped in front of the moving bullet they call the Spring Gala. Being the host for the Spring Gala had driven the last lady crazy and she now lives with her parents and must wear socks on her hands to keep her from harming herself or probably others. However, Katie Otto is a mom and we do what we must do especially if we had already used a fake pregnancy and no one would believe we were pregnant again.

I cannot wait to watch the rest of this season, however, I will admit I am spoiled with Hulu and binge-watching shows and having to wait for an entire week really sucks. Till next week dear readers may your carpool lines be short and your bubble baths long.