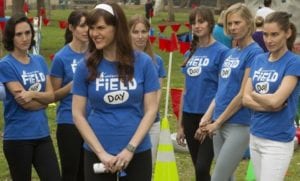 Spring has arrived and so has Field day in Westport. Each spring Westport Elementary School hosts a family Field Day where the mothers and children team up and compete in different field day competitions on divided up teams. When Katie’s team captain places her as the anchor on the Tug-o-War event she feels it because of her size after she confronts the team captain she is moved to the three-legged race with Anna-Kat (Julia Butters). Determined to win the event she and Anna-Kat start training hard but when Anna-Kat gets hurt their chances of winning end. Katie finds out that Anna-Kat lied about getting hurt but when she tells Katie that she only wanted to be a part of Field Day to have fun with Katie, but she felt Katie was like all the other moms who only cared about winning to show off in front of everyone else. Katie and Anna-Kat decide that they were just going to enjoy Field Day and have fun together. 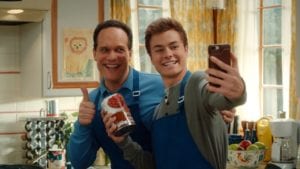 Meanwhile, Greg (Diedrich Bader) enlists Oliver’s help with making the famous Otto chili for the Field Day Chili Cook-Off however where there is no cash prize involved there is no Oliver involved. However, when Trip (Peyton Meyer) Taylor’s new boyfriend joins Greg in his quest to win the Cook-Off both Taylor and Oliver set to break up the new bromance by killing their chances of winning the Cook-Off by spiking their chili with a ghost pepper. However, their plan backfires when they think the ghost pepper was a dud, but their devious plan bites them in their butts. (Literally) 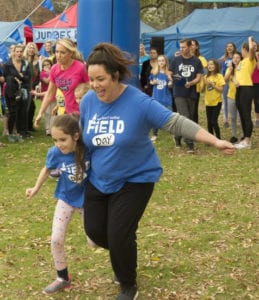 On the big day, Katie and Anna-Kat are set to just enjoy their day but when Anna-Kat overhears the other moms making fun of Katie and her size she decides that she and her mom must take no prisoners. Anna-Kat tells Katie that it is no longer about having fun it was about WINNING. The duo wins the Three-Legged Race hands down. When the other mothers were shocked that the ‘Big Mom’ won the field day event Katie reminds them that it is not always about what size you wear but how you feel on the inside. However, Katie also knows that sometimes size does matter and decides that she wanted her team to win so she becomes the “anchor” of the Tug-o-War and happily gives her arch nemesis Chloe Brown Mueller (Jessica St. Clair) a nice relaxing “mud facial”.