When it is time to read the Last Will and Testament of a loved one, you learn a lot about a family. When Oliver (Daniel DiMaggio) receives a letter from Spencer’s lawyer that she needed to speak with the Otto’s about Spencer’s will the family starts dreaming about inheriting his millions. 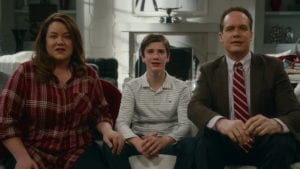 During the meeting, the lawyer informs the Otto’s that the family is indeed named in the will and that they would need to attend the viewing of the videotaped will but in the meantime, she left Spencer’s ashes with Oliver with instructions that Spencer trusted that Oliver would know what to do with them. This meeting left the entire family on edge. 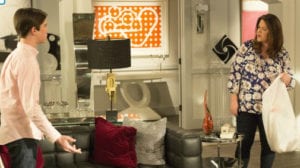 Katie was worried that if they inherited Spencer’s millions that it would change their family and their values, and she was not sure she was willing to risk that. Meantime Oliver was stressed because he could not figure out what his good friend Spencer wanted him to do his ashes. Oliver cared for Spencer, but he could not figure it out so for a price Taylor (Meg Donnelly) and Anna-Kat (Julia Butters) agree to help Oliver also they did not want Spencer haunting the family when Oliver just poured his ashes in the driveway. They start down a path from the prison which leads them to Hawaii but soon Oliver figured out where Spencer really belonged all by himself. 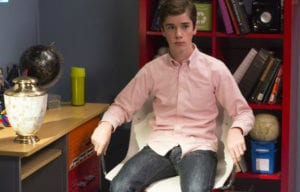 When the Otto’s finally sat down for the viewing of the will,  Spencer appears and tells him how much he cares about them and says that he leaves them everything but he comes back and says you know what “Oliver I believe in you and I know you will make your own millions and I won’t take that away from you”. He also tells Katie and Greg that he knows that money tears families apart, so he does not leave them the money either. The family was disappointed of course in the long run but the Otto’s are a strong family and life will go on. That same strong family is where Oliver decided Spencer’s ashes needed to stay. He places Spencer’s ashes on the family’s fireplace mantel as the sun shines in on it and it lights up the room.

This week’s episode was touching as it reminds me of several times in my life. Sadly, I have seen some greed come out when someone dies but I have also seen some truly amazing selfless acts. This episode sort of wraps up the Oliver and Spencer friendship. I love to see Oliver having “human” emotions. He is usually so obsessed with money and things that when he is showing love and compassion I am always humbled. Daniel DiMaggio again did a great job with this episode.