Family game night becomes a PLUS ONE when Spencer (George Hamilton) becomes a free man from his ankle bracelet and he and Oliver (Daniel DiMaggio) hit the town. They go golfing and make plans to go yachting but when tragedy strikes, Katie and Greg become concerned about how Oliver deals with the loss of his friend. 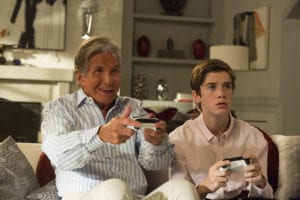 Taylor’s (Meg Donnelly) friends “re-evaluate” their friendship with her and decide to stop hanging out with her. Katie (Katy Mixon) doesn’t take it sitting down. Being a take no prisoners kind of mom she confronts them head-on in the cafe. Taylor becomes a different girl while she is in the no-friend zone and the Otto household kind likes that side of her. So when the “Bloundetourage” comes knocking to apologize Katie blocks their attempts. Taylor finds out what her parents have done and is furious, but she is “dumped” for the second time she sees why her family did what they did. 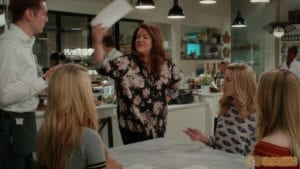 Meanwhile, there is a great debate on where the perfect “home” for Hans Gruber really is. Anna-Kat (Julia Butters) is pulling out all the stops to convince her parents to keep the giant pig in their house, even the old ‘Charlotte’s Web’ the pig can spell until her parents point out that it was the spider that could spell. The family decides that the best place for Hans is a second chance farm for pets. As the family says goodbye to the Hans, Oliver finally breaks down during his goodbye that he really means to say to Spencer. 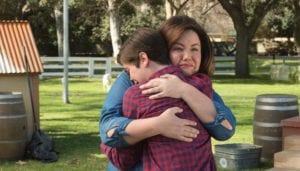 This is the first episode of ‘American Housewife‘ that I have ever cried. My heart broke for Oliver and his loss. I love the connection that Spencer and Oliver had together. I know it was a bizarre connection focused on the money and material items, but they were true friends. Daniel DiMaggio did an excellent job with this episode. So I send a huge shout out to Daniel DiMaggio on a great episode and a great scene as he said his goodbye to Spencer (even if it was to the pig)