Katie Otto (Katy Mixon) is less than two months away from the Spring Gala and still needs a venue. Sometimes you must make a deal with the devil or in this case Chloe Brown Mueller (Jessica St. Clair). However, when the devil won’t listen to  Anna-Kat (Julia Butters) and her sweet pleas on behalf of her mom. Katie is forced to send in the big guns, her lawyer friend Angela (Carly Hughes) to play hardball. To Katie’s surprise not only did Angela play hardball, she convinced Chloe Brown Mueller to join Angela’s “team”. Of course, Angela just wanted to play the game for one night, but Katie needs her to continue playing the “game” until Chloe’s ex-husband signs the contract on the venue. 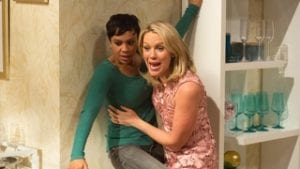 Once the deed is done Angela’s shows Chloe out the door.  This sends Chloe Brown Mueller to the last person who expected her to show up on her small, poor front porch, Katie. Katie is not sure how to console the crying Chloe Brown Mueller but she is desperate to get her arch enemy off her lawn without losing the venue she desperately needs. Trying to be the better person Katie comes clean about asking Angela to continue sleeping with Chloe, so she could get the venue in hopes that the break up would be on Katie and not something Chloe did. It works too well sadly, and Chloe informs Katie she can no longer have the venue that was promised to her while she was dating Angela. Anna-Kat being her mother’s daughter decided that if her cute smile wouldn’t win over Chloe Brown Mueller then she would just have to “Dance with the Devil in the Pale Moonlight” and Anna-Kat and Franklin pay Chloe a visit to her store where poor Franklin has another “unfortunate accident”.  Anna-Kat points out that is such a shame that Franklin, who is the son of a judge, got hurt in the middle of Chloe Brown Mueller’s fancy store. Guess who got her venue? 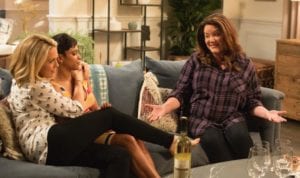 While Katie is lost in the bad romance novel starring Chloe Brown Mueller and Angela, Greg (Diedrich Bader) decides to step up and volunteer as the school crossing guard. Well, nothing brings siblings together faster than a plot to remove a parent from an embarrassing school situation. With Anna-Kat leading the charge, the Otto siblings put a plan into motion to get Greg out of his position before he can embarrass the trio any further. So, a planned “hit and run” of Franklin (Evan O’Toole) in the crosswalk leaves Greg stripped of his crossing guard vest and overwhelmed with guilt. 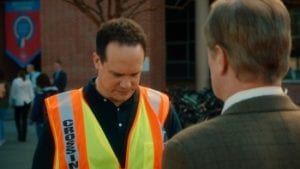 When the kids become guilt-ridden because they see their dad so depressed they admit to their mom what they did. Katie gives the chance to come clean but instead they find another less “embarrassing” volunteer position for Greg at the school but not before Katie lets Greg in on what really happened in the crosswalk that day. Let’s just say the trio learned what TRUE embarrassment felt like.  That is why I love the Otto’s……