We’ve lived in a Murder House, been committed to an Asylum, joined a Coven, traveled with a Freak Show, checked into a Hotel and faced reality in Roanoke. What else are we in store for?

In a recent interview, American Horror Story creator, Ryan Murphy, spilled several clues about what the theme of an upcoming season of AHS could entail. He did make it clear that it would not be happening anytime soon, but he did give up some juicy details.

“It’s a character from season 1 that will be thrust into the world that you are left with at the end of Coven, which is sort of like the male/female/witch academy,” states Murphy, “And then all of those characters will intertwine, which is confusing because some of them are from seasons 1 and 3. Like, Sarah Paulson will probably be playing 18 characters.” 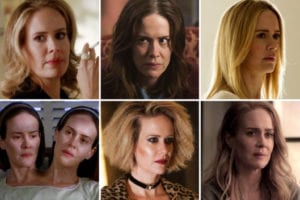 Murphy had revealed in an interview with Entertainment Weekly, that the crossover would not be this upcoming season but with the show being renewed until, at least 2019, it won’t be too long before all is revealed. The theme for season 7 has already been set, with it taking place in modern times. Paulson and Even Peters have already been signed on for the upcoming season but season 8 and 9 are still to be determined.

All I can say is that Ryan Murphy and producers of AHS have made this Horror Fanatic one happy girl! I can’t wait for Seasons 7, 8, and 9 and hopefully more after that.