Despite Whitney Henriquez’s disapproval, Johnny Depp made a Surprise appearance at the 2022 MTV Video Music Awards Sunday night. This was Depp’s highest-profile public appearance since Depp and  Amber Heard‘s defamation trial ended on June 1. Henriquez, Heard’s sister, went on to call the act a “desperate” attempt by MTV to get extra attention for their awards show.

“[MTV], you’re disgusting and clearly desperate!” Henriquez wrote in an Instagram Story post Sunday night. “I really hope that none of the people that made this call have daughters.” She included the hashtag “I stand with Amber Heard” and a picture of her sister under the MTV VMAs logo. 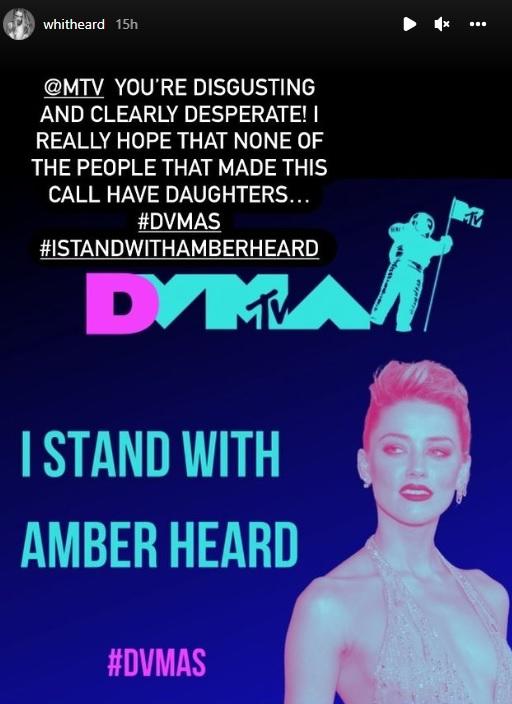 Depp made several appearances throughout the episode, with prerecorded messages played on a life-size Moon Person figure. His first appearance occurred after Jack Harlow, Fergie, and Lizzo sang their opening number before host LL Cool J began the broadcast. “Hey, you know what? I needed the work,” Depp explained in his introduction.

Later on, as the Moon Person figure floated above the audience, he said he was available for any event. I just want you guys to know that I’m available for birthdays, bar mitzvahs, bat mitzvahs, weddings, any ol’ thing you need… Anything, you name it. So, oh, I’m also a dentist,” he said.

Depp and Heard were married from 2015 to 2017. In 2019, Depp sued Heard over a Washington Post op-ed in which she wrote about being the victim of domestic violence. Heard countersued, arguing that statements from Depp’s lawyer Adam Waldman in 2020 were defamatory. After the trial, the jury awarded Depp $10 million in compensatory damages and $5 million in punitive damages from Heard, although the punitive damages were limited to $350,000 under Virginia law. The jury only agreed that one of three contested remarks from Waldman were defamatory, so Heard was awarded $2 million in compensatory damages from Depp. Heard’s team has appealed the verdict.

Following the verdict, Henriquez, who testified on her sister’s behalf, has continued to voice support for Heard. “I still stand with you, sissy. Yesterday, today, and tomorrow I will always be proud of you for standing up for yourself, for testifying both here in Virginia and in the U.K., and for being the voice of so many who can’t speak to the things that happen behind closed doors,” Henriquez wrote on June 5. “We knew that this was going to be an uphill battle and that the cards were stacked against us. But you stood up and spoke out regardless.”

“I am so honored to testify for you, and I would do it a million times over because I know what I saw and because the truth is forever on your side,” Henriquez continued. “I’m so sorry that it wasn’t reflected in the decision made by this jury, but I will never give up on you, and neither will anyone who stands with you. Forever by your side.”