Ahsoka Tano has come a long way. When she was introduced as Anakin’s padawan in The Clone Wars, movie fans were doubtful at best. After all, how significant can she be if she wasn’t even mentioned in the prequels? However, creator Dave Filoni had faith in his creation, and after an incredible run on The Clone Wars and Rebels, Snips became a true favorite. 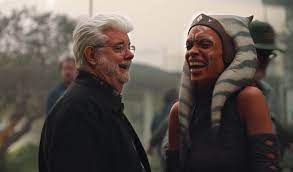 She was a big-screen presence in The Mandalorian (as played by Rosario Dawson), and she’ll have her own program on Disney Plus in early 2023, with Ahsoka set to debut. Filoni’s reaction to an early episode’s rough cut demonstrates his pride, as Dawson revealed at the Chicago Comic & Entertainment Expo.

“I will probably get in trouble for saying this, but Dave saw one of the episodes already edited together, and he walked up, him and Carrie Beck, both, like, glossy-eyed, and he said to me that it was ‘a religious experience.’”

That’s got to bode well. There’s no one else at Lucasfilm we’d rather have in control of Star Wars than Filoni. The man eats, sleeps, and breathes in a galaxy far, far away, and it’s remarkable that the Disney Plus episodes produced without his direct involvement tend to be a little disappointing (though this may change with Andor next month). Ahsoka should be appearing more frequently in the coming weeks. The D23 Expo, which is set to take place from 9 to 11 September, will likely include the official debut of several new programs. Fingers crossed that we receive a teaser trailer that offers us a better understanding of the program. But hey, just having confirmation on Grand Admiral Thrawn’s casting would be great…