We’ve seen plenty of hack and slash titles before, but we’ve rarely had a video game – or any media for that matter – show the Four Horsemen of the Apocalypse as protagonists. This is the premise of the Darksiders series. Each game follows the adventures of a different Horseman as they deal with the end of days; but it’s actually a lot more than just your run of the mill “end of the world” RPG. From ancient genocides to evil alliances between Heaven and Hell, the Darksiders series gave us a world full of intrigue and wonder. And after almost five years of waiting, it’s finally back for its Third installment.

As for why it took five years to get here, it’s a long story. Basically, the original game’s publisher (THQ) went under, but thankfully Nordic Games game along and bought up some of their IPs. Nordic – now called THQ Nordic – then brought back many of the game’s original developers from Vigil Games and tested the market with some HD Re-Releases of the original series. The water looked fine and Darksiders 3 was announced this week with Gunfire Games taking the helm!

Darksiders III will follow the adventures of Fury, the third Horseman – I mean Horsewoman – of the apocalypse as she hunts down the manifestations of the Seven Deadly Sins. Like her brothers War and Death before her, Fury will have her own unique fighting style. Unlike her predecessors though, Fury will be more of a Mage and focus on ranged attacks with her whip and powerful spells. Though the most interesting detail we got about her was that unlike her brothers, she will have multiple transformations – each of which will drastically change her weapon, fighting style and movements.

IGN released some very early pre-alpha game footage today and it looks great. Fury’s movements are just that: “full of fury”. Unlike the bralwer-like warrior Death, Fury hits a lot lighter but more often. Additionally, she seems to have the agility of Death cranked up even further. Again, this was only pre-alpha footage so MUCH has to be added, but if this is the basic framework they’re working with, it’s going to be a very fun game. Additionally, GunFire Games is aiming to make this game look less game-y – or in other words, puzzles, enemies and objects will all look like they naturally fit in that environment as opposed to just ‘popping up”. In fact, they told IGN that this game would steer away from any ‘hard load screens’ and instead feature a fully connected environment. Basically “the whole game world almost acts as one giant dungeon”. 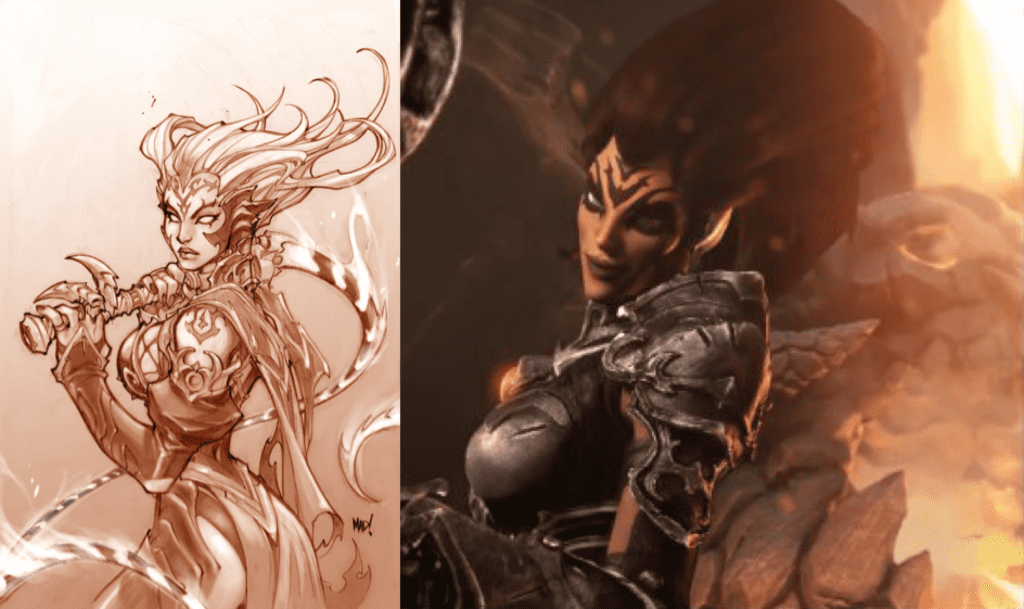 Darksiders III will take place around the same time as Darksiders 2, which continues the notion that this series will be 4 individual games that end in a MASSIVE fifth installment where all the Horsemen unite. Though what really has me excited is the look and style of Fury. Back in the old concept art books for Darksiders and Darksiders II there were rough sketches of all of the Horsemen. The Fury we see in this trailer is perfectly in line with the original concept art from years ago! It might just be me, but it’s great to see that level of attention paid to continuity.

Darksiders III will be released in 2018 and more details on Darksiders III will most certainly be released during the upcoming E3, but if you’re already sold on the idea, it seems Amazon is already taking preorders for the game. Stay tuned for more information but until then, enjoy 12 minutes of Gameplay footage below of Fury taking on Sloth.