One of the craziest moments in all of WandaVision was when Quicksilver showed up! Not only was it cool to see Quicksilver one more time but it wasn’t even the Quicksilver we were expecting! No, friends, it was the Quicksilver from the FOX X-men movies! Except it also wasn’t at the same time! It’s complicated and if you wanna know more you should probably just watch WandaVision, it was phenomenal! Except, it did raise a few questions. Where the heck was the original Quicksilver? Quicksilver was portrayed by Aaron Taylor-Johnson in Avengers: Age Of Ultron! Well, it sounds like Aaron Taylor-Johnson almost DID come back as Quicksilver! I can’t say I minded too much, though, since I always preferred the FOX version if I’m being honest, but then again who didn’t? He was hilarious! 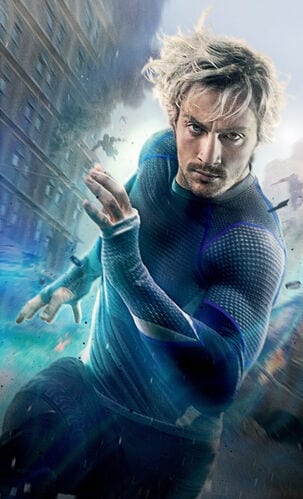 Matt Shakman, in an exclusive interview with comicbook.com, talked a little about Aaron Taylor-Johnson. Apparently, they did have talks about bringing him back. “There definitely were conversations about bringing Aaron Taylor-Johnson back early on, I think Kevin [Feige] talked about this publicly. But it was ruled out fairly early on and we’ve already got Vision from back and so Agatha is bringing Pietro into this world, fake Pietro, into this world to further her agenda. And so having that be a recast Pietro worked on our meta level, but it also made sense thematically when we were talking about grief, which is that grief clouds your judgment, you’re willing to believe things you wouldn’t. You’re living in this fantasy of, ‘If this is my brother, even though I don’t know or feel that he’s my brother, I’m willing to accept it because I miss him so much.”

I guess it’s a shame that the original Quicksilver couldn’t come back but it sounds like it ended up being for the best. It worked not just in terms of the actors but even in favor fo the show’s plot. Couldn’t ask for more, if you ask me!

Home » Uncategorized » Aaron Taylor-Johnson Almost DID Come Back As Quicksilver!