She-Hulk is the latest Disney+ MCU show to wrap filming, and fans are excited about this update! She-Hulk is supposed to drop sometime next year, though Marvel will certainly give us a more concrete date as it approaches! She-Hulk is all done with filming and a shirt might have revealed what Bruce Banner has been up to. That’s right, She-Hulk wrapped filming!

Tatiana Maslany will be playing the role of the titular She-Hulk. Also known as Jennifer Walters, who also has a huge tie to one of the Avengers. Jennifer Walters is actually the cousin of Bruce Banner, The Hulk.

Jennifer Walters is a lawyer, and unlike Bruce, she is always in her Hulk form. Luckily she doesn’t bulk up quite as much as Bruce, but she still ends up rather muscular and is certainly a powerhouse.

Little is known about what the plot of the show is going to be like, but we might know what bruce has been doing since Avengers: Endgame. Instagram user @homemakeoverbycarlos posted a picture of himself wearing a shirt that seems to have been a gift to the cast and crew for wrapping filming.

The shirt depicts a chibi She-Hulk and Bruce at a Tiki Bar. What’s most interesting about the Tiki bar is the fact that it’s called ‘Bruce’s Bar’. Could this mean that since Endgame ended, Bruce has gone off somewhere to open a Tiki bar?

Not going to lie, that would be a pretty awesome way to end Bruce’s time as an Avenger if you ask me. 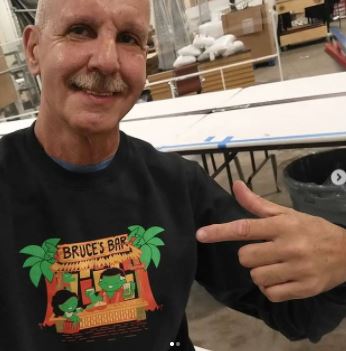 Jennifer Walters ends up getting her powers after accepting a blood transfusion from her cousin. That’s how she gets her powers and from that point on she has to balance working as a superhero with her career as a lawyer. That’s what She-Hulk will be exploring when it finally launches.

Since She-Hulk wrapped filming it’s only a matter of time until we see a trailer for the series!

Home » Television » A Shirt Might Have Given Away A She-Hulk Plot Point Related To The Hulk! Congratulations On Wrapping Filming!