Horror is a fickle genre. It seems every year that there are a countless number of slasher, monster, and possession movies that fill our screens but very few have staying power outside of the post-movie conversation. “Oh man, I jumped so high when the monster ate that thing” or “I can’t believe that person cut off that body part, it was so gross.” We live in a society where horror movies are just viewed as popcorn flicks. Something we go to watch because in some strange way we want to punish ourselves. I imagine this is the same reason why people ride roller coasters. That need to be afraid of something. To break the tension of everyday life by laughing at the things that make you jump. Horror movies serve as a test of our mental endurance. A barometer of where the line is in the films we watch and how comfortable we are crossing it. 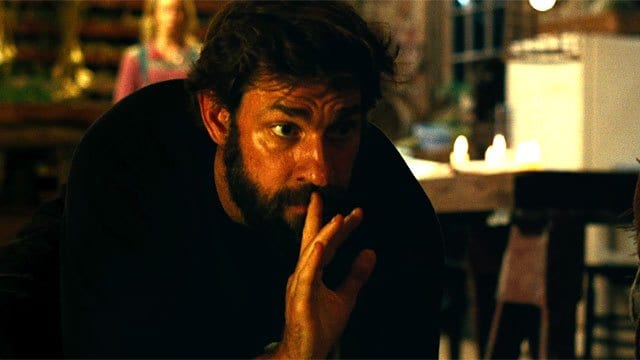 The problem with the horror genre is that good horror movies are few and far between. Often, horror movies are serviceable but more often than not they’re terrible. More comical than scary, and sometimes that’s okay. It’s the fact that you can laugh at these obscene scenarios that should be scaring you that make even the terrible horror movies slightly enjoyable. Almost like you’re laughing in the face of danger. “This should have scared me, but here I am laughing at you. You don’t scare me.” What happens though when you can’t laugh? Or, maybe you do laugh because you’re so scared. Slipping out of you like a strange defense mechanism telling you everything is fine and that you’re okay. That, my friends, is when you’ve found yourself a great horror movie.

In recent years, there have been a handful of great horror movies that have left audiences terrified and frozen in their seats. Films like Get Out, Veronica, The Babadook, and It Follows have all been stand out horror movies, but why? This small collection of films rise above the others because they were willing to do something different. Horror movies are all about the presentation. There’s only so many times an audience member can be scared by a horror movie that follows the same formula as a million others. If you want to be truly scary than you need to be different from everything else that came before you. Think outside the box. I’m happy to say it’s John Krasinski’s ability to think outside the box that makes A Quiet Place such a unique and refreshing horror film worthy of being added to the short list of recent great horror movies.

A Quiet Place is a tense, atmospheric force that thrusts its audience into a world they know nothing about, and that’s part of the beauty. Far too often in films or television, we are given far too much exposition.  Stories aren’t given the room to breathe and develop organically, instead, there is that one character who has to explain everything, acting as a conduit between the film and its viewers. A Quiet Place doesn’t focus on giving you the background on the alien attack that has forced earth into silence. Instead, it starts at day eighty-nine, and we know as much as our characters do. The sound is the enemy drawing creatures out of the darkness to devour you. There are hints dropped across the landscape of the film, like tiny breadcrumbs, laying out the devastation that has incurred like stray newspaper headlines or a dry erase board mapping out what the characters have discerned on their own giving the audience and the characters almost an equal footing. A Quiet Place doesn’t concern itself with being an alien monster movie instead it focuses on being a movie about family. 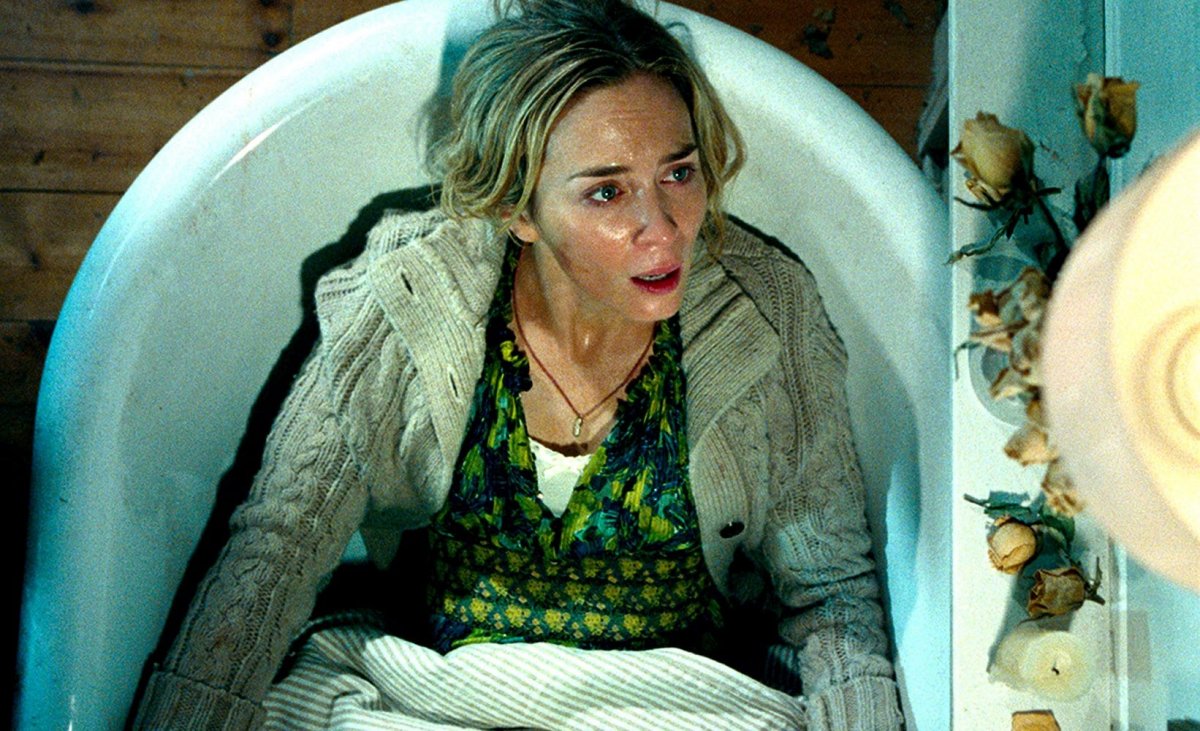 As an audience you need to be invested in the characters of a horror movie otherwise why would you care about their survival? Within the first ten minutes of the film, you fall in love with the Abbots, a name that is never spoken but is seen painted on the family’s mailbox, which is another achievement of the film. The lack of sound shifts the audience need to hear dialogue to paying closer attention to their surroundings. Further proof that Krasinski has created a fully immersive world. The Abbots though are a family unit who not only look out for their surroundings but each other as well. The severity of this new world is not lost on them as the family ditches footwear, creates trails of sand to muffle their footsteps, and at times literally catch one another in the attempt to prevent sound. Despite all the tragedy and terror in the world, the Abbots are able to remain a family… until tragedy strikes, which it often does in horror and Disney movies.

The Abbots become in need of healing in a world where it’s not necessarily easy to convey one’s thoughts. A large portion of the movie’s dialogue is conveyed through sign language and emoting, and this is where the cast truly shines. It’s easy to have a film with little to no dialogue and for audiences to grow restless and bored. For some, dialogue is what keeps them engaged; A Quiet Place uses your investment in the characters and the atmosphere to keep your senses heightened. You don’t want any of these characters to speak because you don’t want them to attract the monsters, but you also want them to move forward. The first time Emily Blunt whisper signs it’s slightly terrifying as you feel even the slightest noise will draw disastrous results. Every sound is significant and again this is an area where Krasinski’s direction shines. With the omission of conversation, everyday noises become amplified, increasing your heart rate as you wonder what noises are background to the creatures and what noises draw them. The entire film is like walking on eggshells.

There’s no doubt that it’s not easy making a movie where emoting is your main source of communication but the cast excels here, led by young Millicent Simmonds. Simmonds’s, who is deaf in real life, creates a character stuck in the middle of regret and wanting to move on and not knowing how. Limited in a world that won’t let her express herself properly. Limited by a father who wants to help but doesn’t understand that his “help” is ignoring the very real problem. It’s the relationship between Simmonds and Krasinski’s characters that highlights the limitations of communication in this world. Yes, the Abbots know sign language, something they knew before the attack thanks to their daughter, but sometimes body language says more than words. 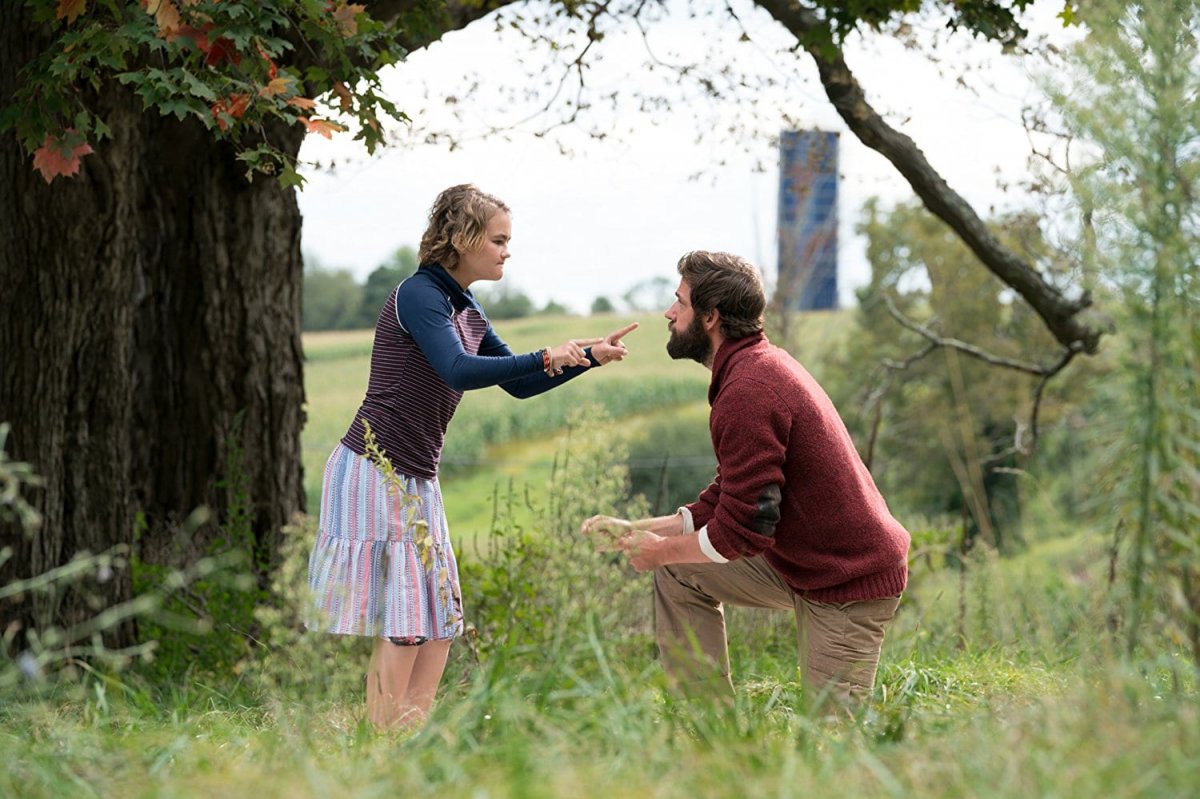 The intricately crafted world and the ever-growing tension within it really allow the film’s climax to serve as a repeated punch to the gut. The last forty minutes of the movie moves at a breakneck speed heightening the stress of the story giving the audience very little time to catch their breath. It’s not until the climax hits that you realize you’ve been holding your breath the entire time. At some point, we become participants within the landscape of A Quiet Place afraid to move or dig through a bag of popcorn because it seems wholly possible that the noises you create could draw the attention of the monsters who excel in hearing. Think of them as ear holes with razor-sharp teeth. As the film steamrolls to its conclusion, with what is sure to be an iconic scene involving Emily Blunt and a bathtub that exemplifies Blunt’s heart-wrenchingly tender and vulnerable performance, the anxiety is revved high and the emotions come pouring in.

With A Quiet Place, John Krasinski has provided a memorable horror film that breaks the formula giving us a vast landscape that often feels as claustrophobic as Ridley Scott’s Alien. This is a story about family drama, healing, and moving on that just so happens to have creatures that will eat your face if you make any noise. A Quiet Place is the breath of fresh air you take when you step out of the theater. A relief. Something new and engaging that delivers the scares but leaves you feeling something, and at the end of the day that’s what the film wants. It’s not just trying to scare you it’s trying to make you feel, and sometimes that can be scarier than monsters.