Want to get on the Twin Peaks bandwagon, but, afraid to commit 42 hours of your life watching something almost 27 years old? With all of the cameos, mystery and social media hoopla…who wouldn’t?

The first thing you’ll hear from a Twin Peaks fan is that you HAVE to watch the two original seasons and film in a very specific order to actually understand what’s going on.

While this might be true, I’m here to reassure new fans or non-fans that it IS possible to watch Season 3 with a very minimal knowledge of the Twin Peaks universe.

With just a few easy steps, you will be caught up and ready to watch Season 3 of Twin Peaks.

David Lynch is the creator/director of Twin Peaks.

He is known for surrealist style and bizarro storytelling. Nothing this man does is ‘easy’ viewing. With films like Blue Velvet and Eraserhead, he’s a filmmaker that likes to dazzle you and then confuse the out of you.

David has admitted in the past that a lot of the iconic scenes in Twin Peaks were just passing thoughts that he wanted to throw into the show. So, don’t try too hard to make sense of it all.

He is writing and directing all 18 episodes of the Twin Peaks revival. 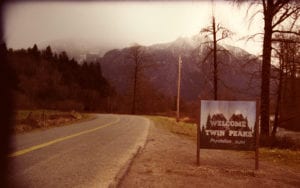 The original Twin Peaks (1990-1991) is a surrealist crime/dark comedy/drama that takes place in the small, weird town of Twin Peaks, Washington.

The series follows the murder of Laura Palmer (played by Sheryl Lee). After the town is thrown into disarray, FBI Special Agent Dale Cooper (played by Kyle MacLachlan) is sent in to investigate and crack the case.

As the series progresses, it begins taking a weird supernatural turn, as Agent Cooper uses unorthodox methods to get to the bottom of the case (this includes utilizing his dreams and chatting with the mystical Log Lady).

Eventually, Laura Palmer’s killer is caught using these strange methods . The killer is revealed to be none other than Laura’s own father; Leland Plamer (played by Ray Wise).

In the end, Agent Dale Cooper is possessed by the evil spirit Bob, who apparently drove Laura’s father to kill her. He finds himself in the Red Room (which is a part of ‘The Black Lodge‘ AKA a black puddle in the woods).

Now, a possessed ‘doppelgänger’ of Agent Cooper roams free, as the ACTUAL Agent Cooper is trapped in the Red Room with the spirit of Laura Palmer…who says she’ll see him in 25 years.

Well, it has been 27 years…I guess she was close enough.

Dale Cooper is a Special Agent for the FBI working Laura Palmer’s case. He slowly becomes connected to the spiritual and supernatural things happening in Twin Peaks…so much so that he falls into The Black Lodge and winds up in The Red Room…trapped…for 27 years.

Dale’s doppelgänger walks the Earth, possessed by the evil ‘Bob‘ while he watches from The Red Room.

While in The Red Room, he is looking for more answers (mainly from the One Armed Man) regarding the death of Laura Palmer and possession of his doppelgänger.

Killed by her father, Leland Palmer,  she wanders throughout The Red Room providing cryptic details to Agent Dale Cooper regarding her murder and the supernatural occurrences in Twin Peaks.

Laura’s father can be found in The Red Room, and her mother (Sarah Palmer) can be found watching animal documentaries on her living room TV while chain-smoking cigarettes.

The Log Lady sees all through her magical log. She still holds onto it 27 years later…providing mysterious information to local law enforcement (Deputy Tommy ‘Hawk’ Hill) to assist in the case of the MISSING Agent Dale Cooper…oh, did I mention he was missing? He is.

This is mainly just for reference…so, you know who exactly to look for when I keep referring to the One-Armed Man.

While he isn’t necessarily good or evil; he has helped Agent Dale Cooper…and continues to help him in Twin Peaks AND in The Red Room.

I’m including Shelly Johnson in this list, because, she wore the now infamous blue diner dress. She’s been used in a lot of the marketing of the new season as well.

Shelly works at the Double R Diner serving coffee to most of the characters that stop by. She’s sort of the mediator in the mix of the large cast of characters.

Oh, she also had an affair with Laura Palmer’s boyfriend, Bobby Briggs.

The Red Room is a part of ‘The Black Lodge.’

‘The Black Lodge‘ is essentially a black tar looking puddle in the middle of the woods in Twin Peaks.

A lot of the new season takes place here…and, it plays a very important role in Seasons 1 & 2. The Red Room remains a mystery to this day, but, hopefully we will discover a bit more about how it works.

STEP 4: TALK ABOUT IT

Talk about this show with your friends and family. It is meant to be discussed and theorized. If you’re a new fan starting with Season 3, this is a great opportunity to discuss your new perspective of things to friends that are die-hard fans of Twin Peaks.

STEP 5: DON’T TAKE IT TOO SERIOUSLY

This show is insane and all over the place. It’s also intentionally comedic.

So, when you aren’t sure whether to laugh or not…just laugh. Have fun with this show and enjoy all of the WTF moments it will provide you with.

Just remember, if your die-hard friends tell you they’ve cracked the Twin Peaks code, odds are…they’re wrong. DO NOT let them deter you. Just fire it up and enjoy the bizarre escapism that is Twin Peaks.

If all of this seems bat crazy and tough to follow, don’t worry…it is. Just open your mind and try to follow along. It’s all surreal, weird and a bit on the insane side; but, that’s David Lynch in a nutshell.

Twin Peaks: Season 3 only on Showtime. Sundays at 9/8c

***I’ve left a few things out to keep the show somewhat mysterious for new fans. I will post Part Two as the 3rd Season progresses.***