Imagine that, right now, right this second, the zombie apocalypse was starting.  A virus or some type of unexplained sickness is beginning to spread and take over entire towns, cities, states and then countries. Society is beginning to deconstruct right in front of your very eyes!

I don’t know about you but, to me, that sounds really (and, I mean, REALLY) freaking intense!  I’d say that, pretty close to the top of my “to do” list at the beginning of the zombie apocalypse would be to have a stiff drink!!  Apparently, some folks in Edinburgh Scotland agree that the zombie apocalypse and good beer and mixed drinks do, actually, go together!

Last month, we learned that a pop up bar would be opening in Scotland completely based on the world of The Walking Dead.  The pop up bar has recently opened and, thanks to the Edinburgh News, we have a first-hand look in side!

If you are in the Edinburgh area, the bar is housed  at Howe Street venue One Below.  The pop up bar is being brought to life, by a team called Pop Up Geeks who also have set up and operated a Game of Thrones themed bar appropriately called Blood and Wine. Founder Linden Wilkinson boast a massive variety of post-apocalyptic decorations, wait staff in gruesomee make up and more surprises from the location.  Wilkinson, a HUGE fan of the show, said that he and his team are really excited to bring the idea to life.

“Game of Thrones and The Walking Dead are two of my favorite shows on the TV and I’m a big fan of the source material behind them as well.  They have a huge following. That’s what we want – a lot of people to get behind it and excited about the concept.”

He continued on, speaking about his love and fandom for The Walking Dead series:

“It’s definitely much easier for us to look at scenes surrounding stuff we really enjoy.  It’s easier to get excited and passionate about the props when it’s something we are really into.”

In regards to the bar drinks, Wilkinson said:

“It’s been interesting because with Game of Thrones there’s a lot of source material to fall back on with regard to drinks [but] with The Walking Dead that’s not there very much.  We wanted to do drinks and cocktails inspired by major events from the comic and the show but we also wanted them to be things you could find after the apocalypse – not everything would be available.”

For more information regarding Survive Bar, you can check out the Pop Up Geeks on Facebook. Survive officially opened it’s doors on Wednesday, May 3rd and is open every Tuesday, Wednesday and Thursday until June 29th.  Those who arrive, survive, grab a drink and have an awesome time!

What do you think of Survive, The Walking Dead pop up bar?  Let us know your thoughts in the comment section below! 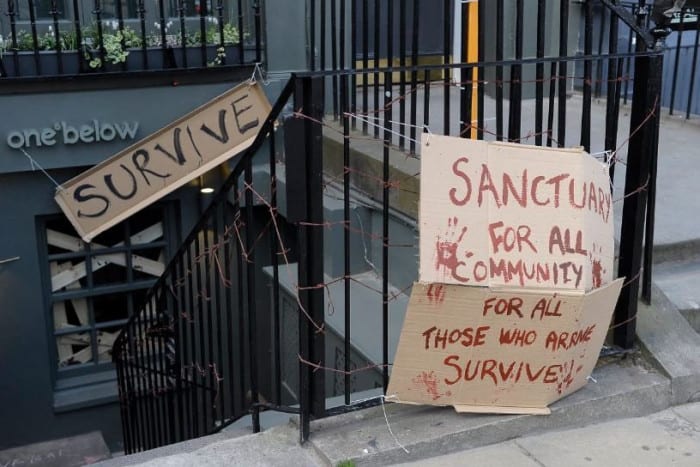