As I was writing this article, I received a very exciting phone call and at the end of March we will be on our first “official” paranormal investigation at the Brushy Mountain State Penitentiary. We will head out there and do interviews, research and conduct an investigation.  We will bring you everything we find at this haunted location. So I will keep you updated as the big day gets closer but I am very excited to be able to do something I truly enjoy again and that is investigating the paranormal.

That exciting news out there, we will go forth with today’s ‘A Journey into the Haunted’ as we visit the topic of the ‘Stanley Hotel‘. The history of the Stanley Hotel and the paranormal occurrences are what nightmares are made of. If you don’t take my word for it the master of horror Stephen King wrote his best-selling novel ‘The Shining’ after his visit to the Stanley. The history behind this beautiful location is somewhat confusing as many believe it to be the filming location for the 1980 version of Stephen King’s ‘The Shining’. However, the filming of the movie starring Jack Nicholson and Shelley Duvall as Jack and Wendy Torrance was mostly shot in at Elstree Studios located in Hertfordshire, England. The exterior of the ‘Overlook Hotel‘ is the Timberline Lodge located in Northern Oregon. It was reported that Stephen King was not happy with Stanley Kubrick’s movie so King himself decided that a remake was needed. In 1997 the TV series ‘The Shining‘ was filmed and the Stanley Hotel was used as the main exterior and some interior shots were used as well. However, the stories that come from this hotel are even more terrifying than novel and movies combined. 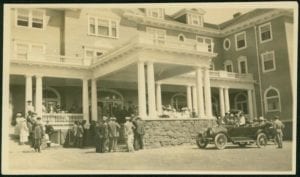 The Stanley Hotel opened to the public in 1909. The hotel was built by Freelan Oscar Stanley who was the famous inventor of the steam-powered car. Mr. Stanley started visiting Colorado in 1903 after he was diagnosed with tuberculosis and his doctors advised him to seek fresh dry air. After just one season, in Estes Park, Colorado Mr. Stanley felt that his health had improved so much that he would continue to return year after year. However, Estes Park was not known for its luxurious atmosphere. The Stanley’s decided that they wanted to bring luxury and high society with them for their visits. That is where the 48-room hotel became a reality. This hotel brought out the rich and the wealthy to Estes Park. Mr. Stanley even designed a fleet of Stanley ‘Model Z’ Mountain Wagons which was used to transport the guests from the train depot to the hotel. This was a hotel like no other of its time. 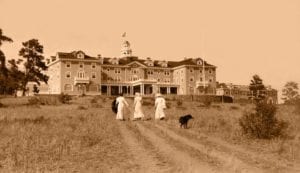 The first several years of the Stanley Hotel were quiet however in 1911 a housekeeper, Ms. Elizabeth Wilson, was electrocuted in room 217 during a lightning storm. The event did not kill her however this room will become one of the most haunted rooms in the hotel. We do not know if it this is the reason for the haunting of the room or if the electrocution was BECAUSE of the haunting in the room. 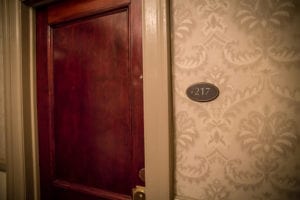 As the years passed rumblings of haunted happenings started to flow throughout its history. However, when Stephen King visited the hotel in September of 1974 with his wife, his experience left him shocked and that is saying a lot about someone who is known as the master of horror. The couple stayed in room 217. The hotel was empty, and the couple “thought” they were only guests. King reportedly wandered the halls, drank in the bar that would also become part of ‘The Shining‘ story. According to www.stephenking.com, King had a nightmare that night so bad it jerked him awake in a cold sweat. In the dream his then 3-year-old son was running down the hallways, screaming while being chased by a water hose. Shaken, he got up, lit a cigarette while standing on the balcony and the novel took shape. 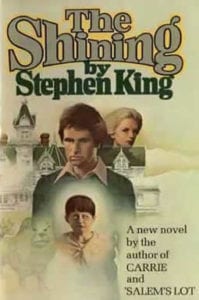 Room 217 is not the only room to have “permanent” guests. Reports from room 401 are about the closet door that opens and closes on its own. The fourth floor which originally was more of an attic area where the staff and their children would live. It has since been remodeled and guest rooms added. People will report that they hear children laughing, running up and down halls and playing. Also, room 428 is another location where sounds of footsteps and furniture being moved around are heard from above the room however it is the slanted roof, so it is not possible.

There are reports of paranormal events happening in every room at the hotel, but some major locations are the grand staircase where people have captured images while taking photos, the underground caves that were used by the employees to get move around the hotel as well as the Concert Hall. However, the staff ensures that all the spirits at the Stanley are friendly. 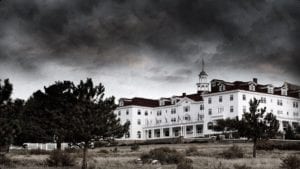 So again, we are at the favorite question is the Stanley Hotel haunted? There have been many paranormal investigations done at the Stanley. The amount of evidence that has come from those investigations done by reputable paranormal investigators is overwhelming. The many reports from guests who are believers but the ones from skeptics who can not explain their experiences are the most convincing evidence. My greatest dream is to make it to this beautiful location and do my own investigation but until I can I will have to live through yours. If you are interested in booking a room at the Stanley Hotel, taking one of their tours which includes “The Shining” and the Stanley sightseeing tour during the day or their “Night Spirit Tour” which includes staff members who will teach you on how to interact with the spirits of the hotel. After a relaxing night of ghost hunting, you can sit back and enjoy “The Shining Channel” where the two movies are played on a continuous loop. Who knows you might meet the ghosts of Mr. and Mrs. Stanley who are reported to have returned to their favorite location after their deaths. For more information check out www.stanleyhotel.com. Until next time…Happy Haunting!

Home » Fun » ‘A Journey into the Haunted’ visits the ‘Stanley Hotel’