Welcome to part two of ‘A Journey into the Haunted’Visits ‘Brushy Mountain State Penitentiary‘. In my last article ‘A Journey into the Haunted’ Visits ‘Brushy Mountain State’ Part 1 I went into the history of this over 100-year-old prison in preparation for our investigation. The history of this prison alone is fascinating, but you add the paranormal occurrences that happen once you are on this intriguing property you have the makings of a Hollywood horror film.

I reached out to the current owners of this now abandoned Tennessee prison and they so graciously allowed me and my team the chance to come and take a tour and do our own small investigation. For nearly a month I researched the prison and its horrific history. I watched videos of other ghost teams hunts and evidence. I looked at every photo from when the prison opened until they shut the cell doors for the last time. Or at least shut them for the “living” prisoners for the last time. However, nothing prepared me for the breathtaking sight that filled my gaze as we came around the curvy road leading to the “End of the Line“.

We were welcomed by Brian May one of the new owners who gave us a tour and explained all the wonderful plans to repurpose this piece of history. From a distillery, concert area, museum, campground and much much more. We then parted ways to get a feel for the place and for my photographer to get photos in the daylight. Before we knew it our paranormal guides for the evening Jaime Brock and Tiffany White who lead the paranormal tours at the prison joined us to give us more information on what kind of paranormal happenings have taken place over the years. 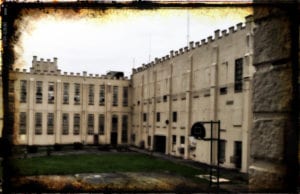 We started in the courtyard where one of the most intriguing pieces of evidence took place. Even though Brushy State was an all-male prison there is a female spirit that is very active in the courtyard by the name of Bonnie. She will interact with most of the ghost hunters who are brave enough to come inside the walls of Brushy. Paranormal investigators are aware that ghosts do not have to be attached to a building to haunt a location they can be attached to the land as well and that is what Jaime feels is the case with Bonnie. 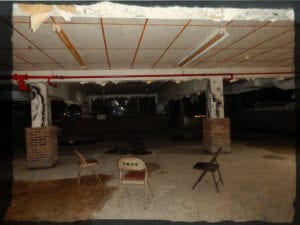 Inside we move to the cafeteria where there are many ghosts said to haunt the location but the one who stands out more than the rest is a spirit they refer to as “Waterhead“. “Waterhead” is thought to be the spirit of a prisoner who was killed while working in the cafeteria. He nearly had his entire arm cut off by his attacker. 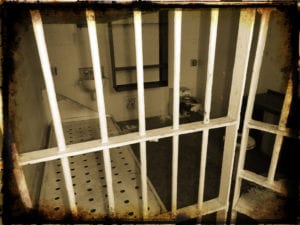 The next location of interest was C block. As I mentioned in the previous article there was a hostage situation that ended with the slaying of two black inmates by what the everyone in the prison called the “Magnificent Seven“. Well in the C block area of that three or four cell area an interesting spirit remains by the name of James. James has a love of cigarettes and that love did not die when he did. It is said that if you place a lit cigarette anywhere in the cell that James will enjoy that smoke just as he did as he was alive. The ghost teams can watch as “James” takes big draws off the cigarette that would otherwise go out due to new safety procedures. 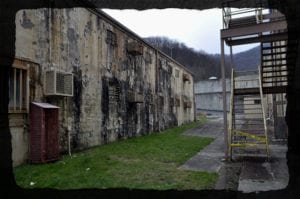 There are many more stories to tell from every nook and cranny of that prison as each cell, each office and every hall has a story and a spirit who so eagerly wants to share their own story but I cannot possibly list them all so I had to list the most prominent ones and that means last but not least we have the spirit of “Leroy” from D Block. Jaime and Tiffany both have assured me that just like in life the prisoners tend to stick to their own “area”. They rarely move around the prison, however, Leroy is another story. Leroy in life was somewhat of a bully so in death not much as changed. So, he often will follow the ghost teams around the prison trying to show them he is there.

I wish I could go on forever about the stories our tour guides shared with us but that is almost impossible in just one article. What comes next dear readers is what evidence that I and my team experienced and caught during our time at Brushy Mountain State. I am currently reviewing evidence as I write this and will continue. However, if you are interested in learning more about the upcoming changes at Brushy State check out their website www.brushymtngroup.com.