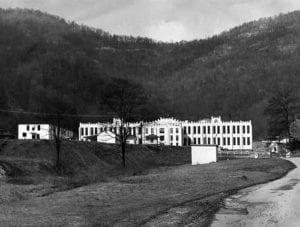 Brushy Mountain State Prison was built in 1896. The original prison was a wooden structure that was built by the prisoners themselves. The location was chosen for many reasons. Geologists were brought in to help to determine the best location to build the prison. They also built the prison directly in the center of the mountains so that they were surrounded by rugged mountain terrain to help keep escape routes down. There were also coal mines on the property and the prisoners would have to work in the coal mines.

In the 1920’s the prison was rebuilt using stone that was found on the property. The new prison was built into the shape of a cross. The prison continued to grow and operate until 1972 when it was shut down due to a strike brought on by prison guards who felt that working conditions were unsafe. The prison was shut down until 1976 when it was re-opened. Brushy Mountain remained open until June 11, 2009. At that time all the prisoners were transferred to Morgan County Correctional Complex. 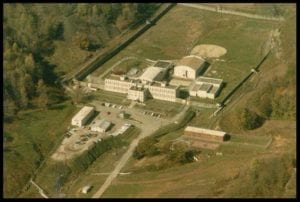 Brushy Mountain held the worst of the worst as far as prisoners went. This was a maximum-security prison. This prison held murderers, serial killers, rapists and monsters. One of the most famous prisoners to serve time behind bars at Brushy was James Earl Ray the man convicted of killing Martin Luther King Jr. On June 11, 1977, Ray escaped Brushy Mountain along with six other prisoners. He was found hiding under a pile of leaves on June 13 when one of the prison guards stepped on him during the ground search. Those rugged mountains that were chosen all those years ago did the job they were supposed to. He was unable to find his way off the mountains before getting caught. 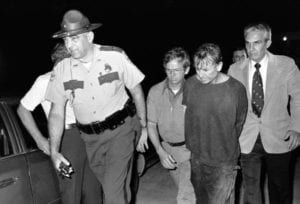 As I mentioned Brushy Mountain State housed some of Tennessee’s worst criminals. The violence inside the prison was a problem that the prison guards had a horrible problem controlling. It was said in some of my research that at one point they averaged one murder a week. On Feb. 8th, 1982, a hostage situation occurred fueled by racism, two black inmates were killed by white prisoners. The white prisoners sawed through their bars, using a gun that had been smuggled inside took four guards hostage. They then went upstairs to where the black prisoners were housed and started shooting them as they went down the line. The prisoners then surrendered to the guards quietly. Nearly 100 executions also took place at Brushy State by electrocution. If there were not murders occurring, there were suicides. There are several registered suicides on the records and listed to be buried in the prison cemetery. Sadly, the deaths on the property were sometimes accidents as well. As I mentioned earlier Brushy Mountain State had coal mines on the property and they would have the prisoners work the mines. There are numerous deaths on the record books of accidental deaths that occurred in these mines as well. Then, of course, there are just deaths that occur naturally and in the very early days when prisoners were not properly cared because a prisoner’s sickness was not a top priority for the guards to be concerned about. 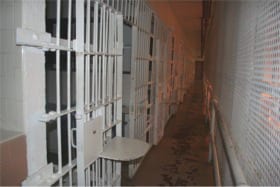 Now we have arrived at our favorite question, is Brush Mountain State Penitentiary haunted? Well, dear readers as we have discussed death is the leading cause of hauntings. I would say that Brushy has seen more than her fair share of death. She has seen some of the most brutal deaths that one could have imagined. She has seen the worst human behaviors, she has seen pure hate and sadly pure evil. That kind of evil will forever leave a negative “impression” on an environment. That kind of horror, trauma, negative energy, sadness, hate, bad and evil can crawl into every wall, corner, crook and cranny.  We then must throw in the natural environment. Paranormal researchers have found that certain natural properties such as water, limestone and other stones can energize spirits. Well, Brushy Mountain has all of those in abundance all around them. There have been many ghost hunting teams to do investigations inside the prison since it’s closing in 2009 and the evidence that has come out of there has been extremely convincing. From one ghost who supposedly smokes a cigarette if you leave one as a gift to one who is named Jack Jett a prisoner who was murdered while talking on the phone. 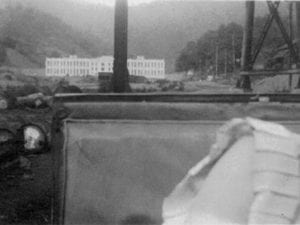 The great thing about Brushy Mountain State Prison is the plans being put in place to repurpose the prison as a tourist destination.  It will have a distillery, bed and breakfast, restaurant, campground, RV park, museum, ghost tours and much more. If you are interested in learning more you can check out their website at www.brushymtngroup.com.

So, in just a few short days my team and I will be heading to Brushy Mountain State Prison. I am beyond excited as this is the largest location with the longest history that I have ever investigated. The next article will feature the interviews and more of the haunted history and then the last will feature the actual investigation and any evidence we might collect during the investigation. I hope you will join me during this ‘A Journey into the Haunted’ visits ‘Brush Mountain State Penitentiary’ but until next time…Happy Haunting…..