I must start out this article with this explanation. I rarely write negative reviews on movies or shows I did not enjoy. I am from the south where we are taught from a young age “if you have nothing nice to say just simply say nothing at all”. However, we have also been known to say, “if you have nothing nice to say, come sit by me”. That is how I will approach this review of ‘A Ghost Story‘. As I said if I do not enjoy a movie or show I just leave it at that, however, I feel that it is my civic and moral duty to warn as many people as I can about this movie. This is my Public Service Announcement and trust me you will thank me in the long run.

My darling children offered to rent a movie for my birthday, so they had me go through the Redbox selection and see which movie I wanted to watch. I proceed to check out the selection and come across ‘A Ghost Story‘. I read the blurb and thought yes this sounds like a good supernatural movie which I have not seen in a while. It reads something like “A man dies and comes back as a ghost to haunt his girlfriend then the families that move into the house decades later.” In my head, I pictured one thing, but what played on the television screen was the things nightmares are made of. I do not mean a great slasher film I mean a horrible movie that makes you rethink life decisions and you have to entertain the idea of liquor to even finish the movie. 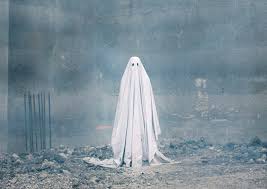 It starts with a man (we do not even find out his name really, but they list is as C in the credits) which is played by Casey Affleck and his wife (who we also do not learn her name, but it is list as M in the credits) played by Rooney Mara. Basically, we spend the first hour of this movie watching this couple not speak. I swear on everything good and Holy if 30 words were spoken in that first hour I am shocked. We see the couple start the movie (not speaking) but you can tell they are fighting because he doesn’t want to move but she does. Then somehow, he dies in a car wreck in their front yard and I do mean in their front yard. We then move to the hospital where 20 of those 30 words were spoken by the nurse asking the wife if she was ok and the wife just shook her head. She leaves the hospital room and “C” sits up on the hospital gurney with the white sheet covering him with eye holes cut out. Please re-read what I just said. He is covered in a sheet with eye holes cut out. He somehow walks out of the hospital is back at their house. We spend what seems like an eternity watching him standing there doing NOTHING but watching HER. There is no talking, no acting or no hope that the movie will end and put us out of our misery. I am going to type this in all CAPS and yes please take it as me screaming. FOR AN HOUR WE SEE THE MAN STANDING COVERED WITH A WHITE SHEET WITH EYE HOLES WATCHING HIS WIFE AND SHE NEVER TALKS. Finally, thank God, she moves out of the house and we think surely the movie is ending. No, because I think in a past life I must have done something bad and this movie was my punishment. The wife moves out and a single Hispanic mother of two small children move in. There are a few words spoken in these scenes, but I do not know Spanish, but I did not care because the fact there was some sort of noise after an hour of silence gave me some hope. 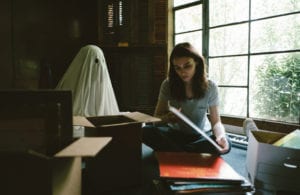 That hope crashed and died as “C” manages to scare away the little family. Then as if the movie could not get any weirder “C” walks to the window looks across the yard at the neighboring house in the window stands ANOTHER sheet wearing ghost. I kid you not. We assume she is female because she is wearing a flower print sheet. I am going to type this, and I know unless you watch the movie you will not understand (trust me it isn’t worth it) the two ghosts lift their arms and wave at each other and in closed captioning carry on a conversation like it is Snapchat for ghosts or something. Again, there are no words just them waving. I am trying to hurry this painful story along. So, people move in and out of the house while “C” just stands there watching. One tenant seemed to host a party and a red-head guy in overalls and a sweat-stained t-shirt who also doesn’t even get a name but is played by Will Oldham had this long speech (which I swear to you had more words than the ENTIRE MOVIE COMBINED) that made no sense to the storyline. Moving the story along the house is demolished as well as the neighbor’s house with the flower sheet ghost. That ghost seems to cross over, or we hoped or frankly, we didn’t care because at this point we were hoping to disappear, but we had invested an hour and a half into this train-wreck and we were committed to seeing it through. I guess they build these high-rise office buildings where the house was and “C” walks around in his now very dirty sheet. Still NO TALKING…. WHY IS NO ONE TALKING???? “C” climbs the stairs to the top floor and I am so ashamed dear readers to even type this but at the point, I am encouraging him to jump so we could be done with this movie. I had this fantasy he would jump and I guess re-die (I don’t know what to call it I just wanted the movie to end) and as he jumped we all did this sick cheer of delight. Karma, however, is a cruel mistress because she paid us back for our delight. As he landed “C” woke up in a field with a man dressed like it is 1890 and he is starting to build a house. We assume it was the house “C” and “M” lived in however out of no-where and no point to the plot and still NO ONE TALKING the pioneer family is murdered by what we assume to be Native Americans because of the arrows. So, to make a long story short (I know too late) “C” is standing in his dirty sheet and watches himself and “M” move into the house. Then “C” is standing in his dirty sheet, watching himself as the newly dead “C” ghost is watching his girlfriend moving out of the house. 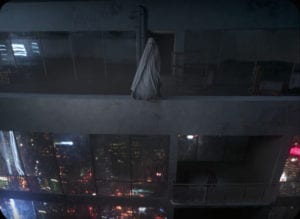 I am not sure what part of this movie was more painful, that we spent of the movie in silence just watching Casey Affleck standing in a sheet watching this girl or that we watched Casey Affleck standing in a sheet watching this girl. I am also confused about some of the scenes and what they had to do with the rest of the film such as why he died in a wreck in his front yard, why “M” drug this giant chest to the garbage, why the pioneer family was murdered by Indians or why in the world the process all started over. I also want to point out that Kesha is in this film.  She wrote a song for the movie and the writer offered her a role. WHY? I am very curious as to how much money Casey Affleck made for this film as it had to be the easiest move ever to make. He had almost NO LINES to memorize, he walked around in a sheet for 98% of the film so it did not matter what he looked like underneath and basically if he did not want to work one day anyone could fill in for him because it was a SHEET for the love of God. I truly do not like writing articles like these because even if a movie is bad I try to find something good or positive, but this was horrible. I am just trying to warn people again as a PSA please do not spend $1.50 at your local Redbox but more importantly do not waste 2 hours of your life you will never get back. Please rent another movie, take an art class, go out to dinner, have your fingernails ripped off one by one or walk on the small tiny Legos your children left on the floor in the dark anything is better than watching this movie. 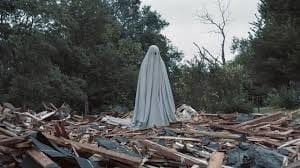 I will leave you this reference as it is the closest thing that came to mind as the credits rolled on this train wreck of a movie. That episode of ‘Family Guy’ when Stewie watches the new ‘Bewitched’ movie. He calmly walked out of the theater, drives to the airport, calmly boards a plane to L.A. where he calmly gets off the plane. Stewie then takes a limo to a hardware store to purchase a ladder then proceeds to Will Ferrell’s house. He rings the doorbell and when Will opens the door Stewie punches him in the face and says, “Not Funny”. If I was not poor and did not have a crippling fear of flying, I would probably do the same thing to the writer of this movie. Again, I am not usually this rude or mean about a film so that should tell you just how bad this film was. So please if you have read this entire article and thought that I have wasted five minutes of your life, I just actually saved an hour and 55 minutes of your life and you are welcome.