I can’t express how amazing it was to be able to volunteer for such an amazing event.  I’ve been to many conventions in the past and thought, how fun would it be to volunteer for one of them. Walker Staker was coming to Oaks. My best friend Julia talked me into signing up with her, so I did.   I never expected it to be as amazing as it was.  My thought at first was that I would get to meet some famous people.  Well that was just an extra perk to the day.

As a volunteer you sign up for one of the many listed jobs available.  I had chosen ticket, since I had the choice of that or outside security.  I’m not much of a security person.  Since I signed up as late as I did, I thought those were the only two jobs available.  Little did I know, they were not.  I only volunteered for one day just to experience it.  So I chose a shorter shift so I could go to the show and enjoy that as well.

The day got closer and closer.  I was more and more excited as time went on. With Julia by my side, it made the experience even better.  We started counting down the days.  Neither of us knew what to expect, but we couldn’t wait to see what was in store for us.

The day was here!! Waking up at 5:30 in the morning sucked especially when you have a 2 year old who decided he wasn’t going to sleep until 11pm.  Needless to say, I was exhausted, but the excitement woke up me.

Heading into the convention center with it still being dark out, and a bunch of people around who all knew each other, was a little intimidating.  Julia and I just sat along the side until we were moved into Hall B where the panels where.  We got our shirts, a black wrist band, and a raffle ticket.  Being new to the scene, we were so confused what everything was.  We met the head team that makes the convention run.  Brad, Michael, Katie where all super nice.  They made sure that we would have a great day.  Which in turn makes the day worth it.

Off we went to our post.  They didn’t need help with ticketing, so I was put with line control inside.  I have to say, it’s fun when you tell people to line up against a wall and they listen.  They don’t have to, but when you have on an orange shirt, they do.  I met a bunch of new people. First I met Cherie who told me this was not her first rodeo.  She was super sweet helping me understand everything.  Cherie was heading off to Robin Lord Taylor’s line control so she had Andrea and her daughter Rachael come help me out.   Andrea went to get stickers that said ‘CLEAN’ on them.  Who knew that adults would love stickers more than the kids.  Jason came in and threw T-shirts out to the group of general admission once VIP was let in.  As he yelled ‘Walker’ they yelled back ‘Stalker’.  10:00 rolls around and the GA was let in.  We continued to hand out wristbands and take tickets.  Jason, Julia, and myself were collecting tickets at the door.  I swear the people thought we were nuts.  12:30 comes around and we head to grab some lunch.  A perk was getting lunch for free.  Now you can’t go over board, but you get a burger and a drink.  Which is just enough.

After lunch Julia and myself were done with our shifts.  We decided to walk around and see what was going on.  We walked back to Hall C to check out the celebrities.  Julia stumbles a fellow writer Jerrold and asks where Shannon was at.  He takes us behind the panels where she is sitting waiting for Michael Rooker’s panel.  It was amazing to get to meet you Shannon.  I hope to be able to see you again!! When we were walking out, Michael Rooker walked right by us.  We were in shock.

We head on out to Julia’s car so she can get changed into her female Negan cosplay.  As we head on in, we meet up with a few friends and walk around the convention looking at all of the artist and merchandise.  I’m proud of myself, I didn’t purchase anything from a convention for the first time! Though I wanted to buy everything!

As we were walking around, Julia decides that she wants to get a picture with Rooker.  And that is exactly what she does.  So we head in line to get our picture.  Now I’ve meet him a few times before so I was not nearly as excited as Julia was.  He was sweet as always. 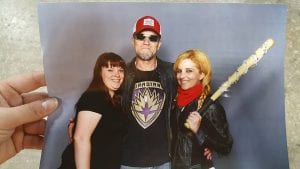 It’s now nearing 4:00 and this is where volunteers get to meet celebrities.  Before doing so, we grabbed some fries.  All that walking around sure works up an appetite.  We headed back to meet these wonderful people we see on TV all the time.  First we went to Robin Lord Taylor since I have been dying to meet him.  He had left about 15 minutes before we got there.  I was bummed, but there is always a next time.  Jason appears and ask us how our experience was going.  We told him it was amazing so far.  He asked if we met Drew Powell yet.  We told him no, and he proceeded to walk up to his table with us introducing us as he signed our shirts. 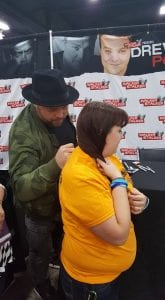 Rooker wasn’t quite ready to sign volunteer’s shirts yet, so we wondered around a bit.  Jason said to us, “Hey let me introduce you to Seth Gilliam (Father Gabriel).”  Well okay.  So we followed him over.  It was amazing to see how many of these actors are so down to earth.  Seth shakes Jason’s hand and he introduces us to him.  Wow!  We couldn’t believe what was going on.  As we all chatted for a bit, Seth says he plans to take his son for cheese steaks and asks where to go.  We immediately tell him Geno’s.  (Don’t hate, that’s our favorite.)

We head over to Rooker and get his autograph.  He was hysterical with the comments he made.  He had to make sure to sign across the chest of my shirt.    We were able to also meet Josh McDermitt (Eugene) who thanked every single one of the volunteers who walked though his line for their work.  Also got to meet Michael Cudlitz who doesn’t sign shirts, but takes selfies.  Who is going to argue with that?  We thought about going over to Norman Reedus line, but it was packed.  Which it always it, but he is an amazing person, so why wouldn’t it be. 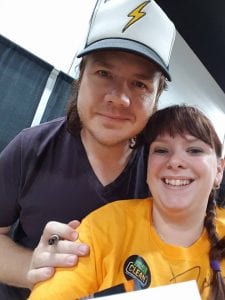 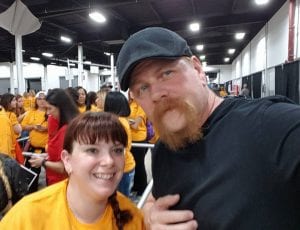 Now it’s about 5:30 and we are ready to head home.  After a long day of being on our feet, meeting new people, shopping and meeting some celebrities, we were exhausted.  It was a perfect day.  I can’t thank everyone enough for everything they did for us that day.  It was all over an amazing day and I can not wait to volunteer again.  I hope to be able to go further with it, but it’s hard to when traveling is not really an option right now.  Thank you again to everyone for making my first time volunteering amazing.  I can not wait to see everyone again. 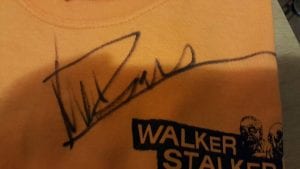 Sarah is a comic loving junkie who takes pride in her nerd-ism. Growing up, she found herself drawn to the Batman comics and Philadelphia Sports. You never see her without a comic book or camera in her hand. Sarah loves photography, comics, and her family more than anything else in the world. <3

Home » Fandom » A Con Through a Volunteers Eyes