If there’s one thing we love as much as Ryan Reynolds talking about his wife Blake Lively, it’s him talking smack about Green Lantern (2011). Thankfully she was in Green Lantern, so these topics usually go hand in ring bearing hand.

God, has it really been only 6 years since that green and shiny nightmare? It seems like a lifetime ago since Reynolds squeeze into some red leather pants and started breaking the fourth wall. The overwhelming success of Deadpool certainly made us forgive him for all his prior hero flicks. Though it’s not so much the costume change that made us forgive him, but rather how he is always able to laugh at himself. It’s that level of humor and humility that makes us love Ryan Reynolds! And there was certainly a lot to love when he joined Colbert on The Late Show With Stephen Colbert this past Tuesday.

During the host’s recurring segments “Big Questions With Even Bigger Stars”, Reynolds asked Colbert if he “could have any superower, what would it be?” To which Colbert replied, “this super-cool alien high-tech ring, and it’s green and it has a lantern on it, and I could use my imagination to make anything out of green light”…

Sorry Stephen. Been there. Done that! So when Reynolds says “That’s a really dumb superpower”, he knows….. he knows. *cries uncontrollably*

Seriously though, making fun of Green Lantern never gets old. Even if the DCEU manages to make a good film about the Green Lantern Corps, this joke will survive for years to come. It’s like emo Tobey Maguire walking down the street in Spider-Man 3; or sewing Deadpool’s mouth shut in X-Men Origins: Wolverine; or Bat-nipples in Batman & Robin. These are things that will never be lived down, so it’s best to just embrace them and laugh with everyone else. 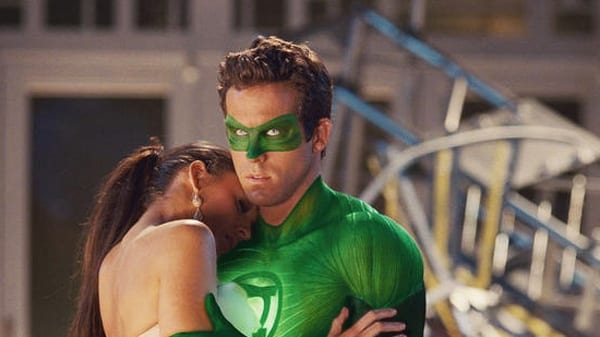 Though Reynolds wasn’t on Colbert just to make fun of Green Lantern. He was actually promoting his new film Life. Life follows a group of astronauts who discover their first single celled sample of “life in out space” is actually a rapidly evolving monster. Hmmm… “rapid evolving single celled monster”…. Is this film has a surprise twist and turns into a Venom prequel? Is Reynolds’ character only able to save the world by putting a green glowing ring on? I suppose we’ll find out this Friday, March 22nd when Life arrives in theaters.