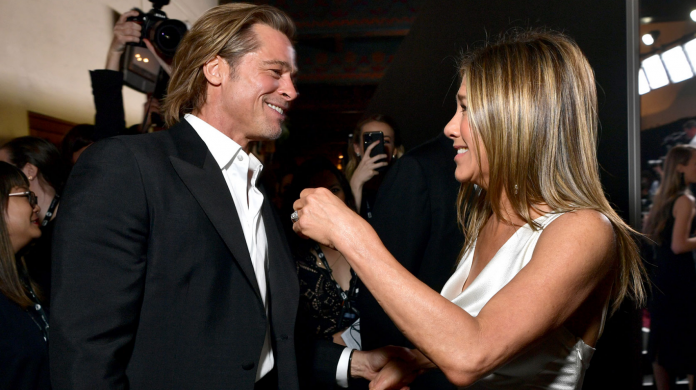 Fans have scrutinized every single second of Brad Pitt and Jennifer Aniston’s meeting at the 2020 Screen Actors Guild Awards on Sunday night at the Shrine Auditorium in Los Angeles. From analyzing hugs, hand holding, laughs and responses, fans are wishing their way to a reunion of the exes.

Here’s the moments that have fans sure that the two are back together:

First, there’s the now famous image of Pitt holding on as long as possible to Aniston’s hand.

‼️ EXCLUSIVE ‼️ Brad Pitt stopped everything backstage to watch Jennifer Aniston’s acceptance speech at the #SAGAwards. Wow guys—it really has been our day, our week, our month, and even our year. https://t.co/m7r01pojsC pic.twitter.com/th9sm1js4D

Finally, there’s this embrace between Pitt and Aniston.

Here’s #BradPitt & #JenniferAniston congratulating each other backstage at #SAGawards. What a moment! Both actors were @SAGawards recipients tonight. pic.twitter.com/xqdO9ZZjQE

Are we over analyzing things or is this thing between Pitt and Aniston for real?