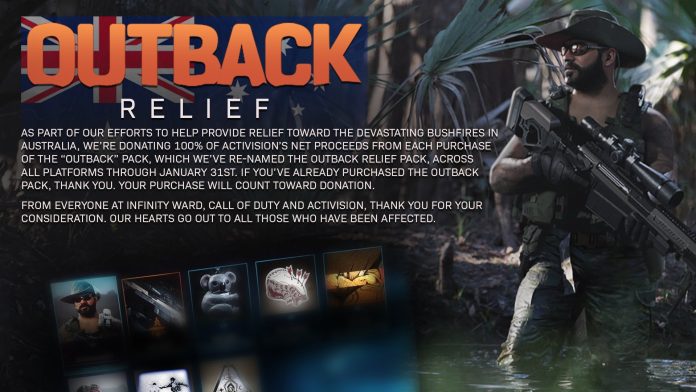 As everyone most likely knows, the fires in Australia are absolutely terrible. It seems like the whole continent is up in flames at the moment. There have been many donations from both companies and celebrities, including Pink and Chris Hemsworth. Our friends at Activision have made it possible for you to donate as well by simply purchasing a DLC pack in Modern Warfare.

It’s really easy to do. All you need to do is purchase the “Outback Relief Pack”. It was originally the “Outback” pack, but was renamed in order to be used for charity purposes. Good news is if you had already purchased it, Australia will still get your donation as Activision is contributing previous purchases as well. The pack contains –

The bundle costs 1800 Call Of Duty Points, which is somewhere around $20. You can use points previously earned from your Season One Battle Pass as well. The best part? All of the proceeds from the pack will go to the relief efforts. In many cases of charity some cut still goes to the one collecting donations, but Activision is pledging 100%.

It’s never good when something like these fires happen to any country. But it’s great to see so many companies and people binding together to help a nation in need. Money won’t necessarily wipe out the fires, but it can hopefully supply much needed funds to fight them and rebuild afterwards. Just remember, no matter how little the donation, every bit helps. Even if it’s 1800 Call Of Duty points.

Call Of Duty: Modern Warfare is available now on PlayStation 4, Xbox One, and PC.