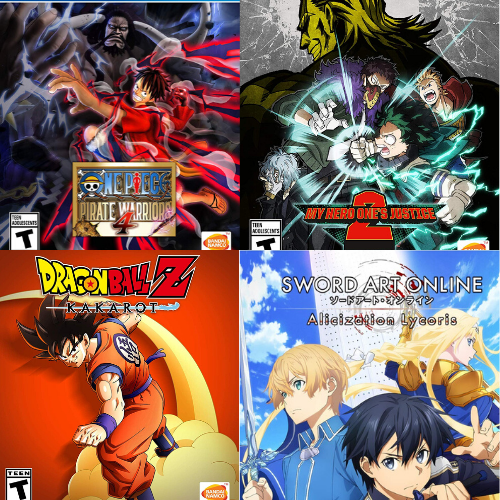 A new year’s just begun which means we have an entire year of brand new video games to look forward to! That includes anime games! In fact, I’m so excited about it I decided to make some lists about it. Who doesn’t love lists!? Especially if they’re video game-related.

This list explores the games that are based on anime that you should be most looking forward to in 2020. Before we go any further it’s probably important to note that the lists aren’t in any particular order and reflect only my own opinion! These are the games I’m looking forward to, but if you’re looking forward to something else I’d love to hear about it in the comments!

So with all that out of the way… Let’s start this off, shall we!?

Alright, let’s get this one out of the way now. Dragonball Z: Kakarot is the game on this list that is closest to release. Slated for release on January 17, 2020, we are literally a little over a week away as of writing this. This is also the game on this list that I was least looking forward to initially. I’ve been burned by Dragonball games before, my friends. I love the series but even I have to admit that sometimes the games that come out could use some more polish.  I told myself I wouldn’t get excited for this one, but I ended up caving in.

The fact that Kakarot isn’t a fighting game makes it interesting right off the bat. I’m a huge fan of RPG’s, leveling up characters is one of my favorite things to do in a video game. Kakarot’s got that, it’s got skill trees, it’s got boss battles and it’s covering the entire Z story. It was initially believed we would only be able to play as Goku but it’s now been confirmed there will be other playable characters as well including Vegeta and Gohan.

There’s going to be tons of sidequests to embark on and there’s even going to be some stuff that fills in some backstories, so I’ve read. This game actually looks like it’s just going to have a ton of content period, which is great news.

I also want to take a second to give a huge shout-out to these graphics. I know cel-shaded graphics have come a long way since the days of Budokai 2 but come on. These graphics are insane. They’re incredibly faithful to the source material while seeming to improve on them. I honestly can’t decide if the original show looks better or if this game is peak Dragonball Z, and this is coming from someone who has sunk a ton of hours into FighterZ.

Dragonball Z Kakarot will be available on PS4, PC And Xbox One and is already available for pre-order if you want to secure some early bonus content.

One Punch Man: A Hero Nobody Knows

One Punch Man a hero nobody knows is the second anime game on this list. Unlike Kakarot this one is a fighting game with a few interesting twists. I think developers Spike Chunsoft knew that this was never going to be an incredibly balanced fighting game. They knew this wasn’t going to be the great new E-sports game and that’s okay. After all, the source material is literally about a character who kills all his enemies in one punch. You can’t balance a character like that without some serious shenanigans.

Instead of trying to deny any of that, Spike is leaning into it instead. There’s a mechanic involving Saitama running towards a fight so you have to wait before he shows up. From the footage I’ve seen, it looks like he DOES one hit people but I’m sure there’s gonna be some drawbacks for having that kind of power.

What’s really cool about this one though is that a lot of the characters in One Punch Man are monsters. This means the pool of characters they can pull from is incredibly diverse!

Argh! One Piece is arguably the most popular manga on the planet. With how well received the previous Pirate Warriors games were received this game was almost an inevitability. This is a game that plays like a Dynasty Warriors game but uses the One Piece property.

This game is great if you want to feel powerful as heck while you mow down hundreds of enemies. It kind of works like a beat ’em up and based on my previous experience with these games it’s safe to say there’ll be a ton of characters to choose from. Not only will there be multiple characters but they’ll all have unique twists that make it worth trying each and every one of them.

The most exciting part about this game though? That’s easy, it’s how far the game’s story will take you. This game looks like it’ll take you through the Whole Cake Island Arc and even partially through Wano. For those not in the know, those are the two most recent arcs covered in the One Piece anime, which has now passed 900 episodes.

One Piece Pirate Warriors 4 will be available on March 27, 2020, for PS4, Xbox One, and Nintendo Switch!

I don’t know if you guys remember the year Sword Art Online came out but it was absolutely wild. This anime came out of nowhere and literally took over the world, people were absolutely obsessed. It was freaking crazy. I only heard about the show after the first season had already finished airing but when I did find it I binged the first season in a single day. The first thing that crossed my mind was “Man, I wish there actually was a Sword Art Online game”. Well, not long after Namco Bandai granted my wish.

Since then we’ve had several different Sword Art Online games and honestly, each and everyone one of them was kinda fun. This one looks like it’s going to be in the same boat and I can’t wait to play it. The show is currently airing it’s, I believe, the fourth season while I haven’t even started the third. No doubt playing this game will spoil the entire thing but I know I won’t be able to stop myself.

It might not be too bad though since the games kind of follow their own continuity. The first game was a ‘what-if’ scenario that let you play out the last 25 floors of the titular video game. It introduced new characters and stuff that have followed from game to game, which is actually pretty cool. If this game continues that trend I won’t have to worry too much.

Just like Sword Art, I feel like My Hero Academia came out of nowhere, and like SAO I was late to this one too. I love superheroes and comic books so to find an anime that combined my love for both was a Godsend. My Hero Academia is set in a world where 80% of the population develops superpowers. They refer to these powers as ‘Quirks’. The show follows Izuku Midoriya, a quirkless boy who wants to be a hero and is given a quirk. He goes to hero school, so as you can imagine this gives the game a ton of characters to pick from.

My Hero One’s Justice, the first game, was a solid anime fighter with a surprising amount of content to it. I’ve been playing these kinds of games for years so I’ve sort of come to expect certain things. What I didn’t expect was for there to be hundreds of customizable cosmetic options and even a mode where you could level up your heroes. For the first game in what was destined to become a series, it had a surprising amount of playable characters, too.

The second game looks like it’s trying to put this one to shame though. There’s gonna be more characters, more customization, and more stage destruction! If that wasn’t enough they’re even adding 2 vs 2 battles which I hope makes it way online so my friends and I can team up to take down villainous scum.

Well, ladies and gentlemen here they are, the list of anime games you should be hyped for. The best part is it looks like the wait for most of them isn’t even that long. I’d love to hear which one you’re looking forward to the most in the comments below!