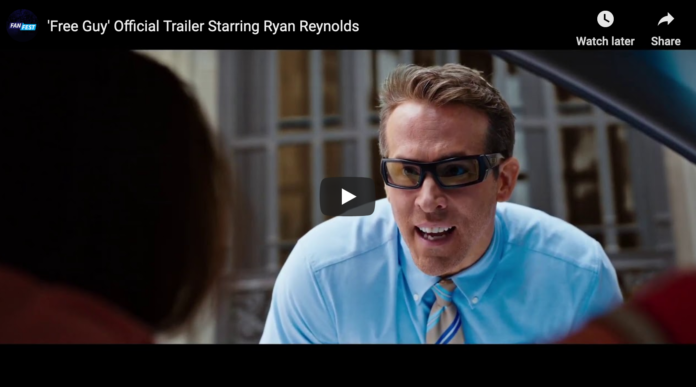 Ryan Reynolds returns to play a superhero once gain but this time he trades his red suit in for a pair of glasses.  Free Guy brings Reynolds humor to a new blend of realism, superheros and video games.

In Twentieth Century Fox’s epic adventure-comedy Free Guy, a bank teller who discovers he is actually a background player in an open-world video game, decides to become the hero of his own story…one he rewrites himself. Now in a world where there are no limits, he is determined to be the guy who saves his world his way…before it is too late.

At CCXP, this past weekend, Reynolds told the crowd, “We really wanted to bring to the world a modern day Back to the Future for modern generations.”  He went on to cite Back to the Future filmmaker Robert Zemeckis as an influence, and also named Will Ferrell’s work in Elf and Petter Sellers in Being There as an inspiration for his Free Guy character.

“Free Guy is my favorite movie I’ve ever made, and that means a lot to me because I made Deadpool,” said Reynolds.