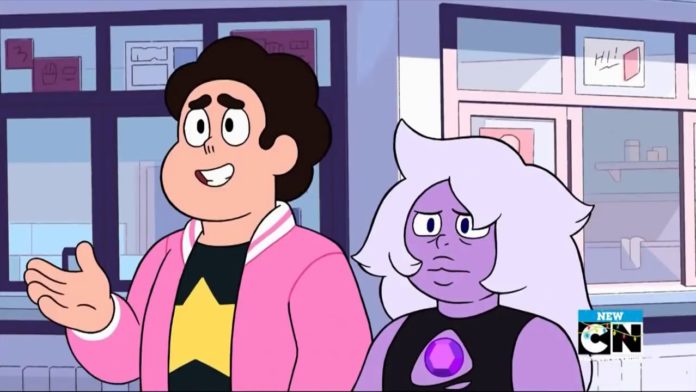 Steven Universe Future episode recap Guidance. Amethyst is helping new gems find their purpose on Earth and has set up a gem mentorship program. She’s paired gems up with humans from around the town to give them new jobs and opportunities. The rubies are bodyguards for Mayor Nanefua, Quartzes helping Mr Smiley run the amusement park, and even two I’ve hard-working on ice sculptures and snow cone machines. It’s going well, but Steven thinks maybe too well. It all seems a little like Home World and he decides to mix things up. He switches up their new jobs, including placing one of the ice gems on rollercoaster duty – much too her delight as she loves to here the humans screaming…

Unfortunately some of the skills that the gems have don’t quite go with their new roles and disaster strikes. Steven apologizes to Amethyst for taking over her scheme and they fuse to make Smoky Quartz. Struggling to save the day and the roller coaster in time Stevens new pink diamond glow reappears and they’re able to develop super speed. They manage to save all the humans but not quite the roller coaster itself, but sometimes that happens.
Steven doesn’t know why he thought he knew better than Amethyst and just tell everyone what to do. Amethyst explains that for so long she didn’t know what her purpose was. So now she’s really good at now helping other gems find where they belong. She spent a lot of time working with the gems and letting them choose what they wanted to do. So, maybe it’s time they start looking at Steven’s future.

What did you think of Steven Universe Future Guidance? Let us know in the comments.